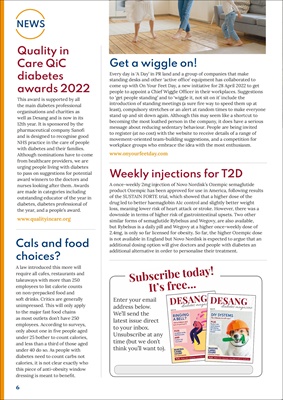 product Ozempic has been approved for use in America, following results

of the SUSTAIN FORTE trial, which showed that a higher dose of the

loss, meaning lower risk of heart attack or stroke. However, there was a

downside in terms of higher risk of gastrointestinal upsets. Two other

similar forms of semaglutide Rybelsus and Wegovy, are also available,

2.4mg, is only so far licensed for obesity. So far, the higher Ozempic dose

additional dosing option will give doctors and people with diabetes an

additional alternative in order to personalise their treatment.

Get a wiggle on!

standing desks and other 'active office' equipment has collaborated to

people to appoint a Chief Wiggle Officer in their workplaces. Suggestions

to 'get people standing' and to 'wiggle it, not sit on it' include the

least), compulsory stretches or an alert at random times to make everyone

stand up and sit down again. Although this may seem like a shortcut to

becoming the most loathed person in the company, it does have a serious

message about reducing sedentary behaviour. People are being invited

movement-oriented team-building suggestions, and a competition for

workplace groups who embrace the idea with the most enthusiasm.

This award is supported by all

organisations and charities as

well as Desang and is now in its

12th year. It is sponsored by the

and is designed to recognise good

NHS practice in the care of people

with diabetes and their families.

Although nominations have to come

from healthcare providers, we are

to pass on suggestions for potential

award winners to the doctors and

nurses looking after them. Awards

are made in categories including

outstanding educator of the year in

the year, and a people's award.

A law introduced this more will

require all cafes, restaurants and

takeaways with more than 250

unimpressed. This will only apply

to the major fast food chains

as most outlets don't have 250

employees. According to surveys,

only about one in five people aged

under 25 bother to count calories,

and less than a third of those aged

under 40 do so. As people with

diabetes need to count carbs not

calories, it is not clear exactly who

this piece of anti-obesity window

dressing is meant to benefit.

be delivered with its dime-sized patch.

Based on technology originally developed

at the University of Queensland, Vaxxas'

of thousands of very short projections

around 250 microns in length. Invisible to

the naked eye and coated with vaccine,

the projections can quickly deliver vaccine

Vaxxas also claims that the patches

can deliver vaccine more efficiently - a

positive when people around the world are

clamouring for a vaccine against COVID19. The

company points to a recent

clinical study in which their micropatch

delivering a sixth of an influenza vaccine

comparable to a full dose by intramuscular

injection. A two-thirds dose by HD-MAP

Because a vaccine is dried onto the

patch, the vaccines are stable outside

of cold-chain (they do not have to be

refridgerated), a potential answer to the

question of how to keep a traditional

countries and even developed countries.

Vaccines delivered through HD-MAP in

for patch, in the diabetes sector at this

not deliver drugs, but it's not beyond the

realms of reason that a similar micropatch

could be used for such a purpose in the

She explains, "With each exercise we'll

do consecutively for 30 seconds and then

rest for 30 seconds. If someone is new to

choose to take a longer rest between

each exercise, for say a minute or two.

Once all of the exercises are completed,

we then take a six-minute rest (which

again is adaptable) and once recovered,

we repeat the circuit all over again."

Stephenson-Grey took part in the

relay and still trains (prior to lockdown) at

the track and in the gym. The exercises

she does include standing squats, pressups, the

pose (when the opposite arm and leg are

stretched out) and sit ups.

She says, "This type of fitness session

is inspired by the type of session I've often

done with my training group over the

years, particularly at the start of the winter

or summer training season, as it helps

build strength and fitness as a foundation

to move onto other things. It works the

arms, legs and core areas throughout

the session, which can be helpful when

training a lot, because no one area is

The home workout videos have been

accepted by many in the community.

She adds, "I'm sharing what training

sessions work for me. Please remember

that you know your own fitness, health

if you are concerned about undertaking

and meters: your choice

time (but we don't

time (but we don't

how to prevent it

An update on the

The ultimate in self-care?