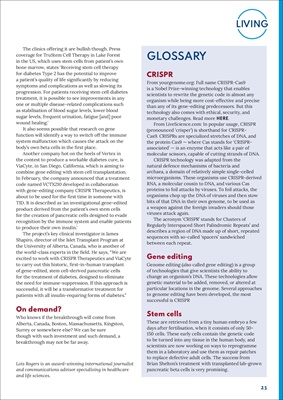 The clinics offering it are bullish though. Press

in the US, which uses stem cells from patient's own

for diabetes Type 2 has the potential to improve

a patient's quality of life significantly by reducing

symptoms and complications as well as slowing its

treatment, it is possible to see improvements in any

one or multiple disease-related complications such

It also seems possible that research on gene

function will identify a way to switch off the immune

system malfunction which causes the attack on the

body's own beta cells in the first place.

Another company hot on the heels of Vertex in

the contest to produce a workable diabetes cure, is

ViaCyte, in San Diego, California, which is aiming to

In February, the company announced that a treatment

with gene-editing company CRISPR Therapeutics, is

about to be used for the first time in someone with

T1D. It is described as 'an investigational gene-edited

product derived from the patient's own stem cells

for the creation of pancreatic cells designed to evade

recognition by the immune system and enable patients

to produce their own insulin.'

Shapiro, director of the Islet Transplant Program at

the University of Alberta, Canada, who is another of

the world-class experts in the field. He says, "We are

excited to work with CRISPR Therapeutics and ViaCyte

to carry out this historic, first-in-human transplant

for the treatment of diabetes, designed to eliminate

the need for immune-suppression. If this approach is

successful, it will be a transformative treatment for

patients with all insulin-requiring forms of diabetes."

Who knows if the breakthrough will come from

Surrey or somewhere else? We can be sure

though with such investment and such demand, a

breakthrough may not be far away.

is a Nobel Prize-winning technology that enables

scientists to rewrite the genetic code in almost any

organism while being more cost-effective and precise

than any of its gene-editing predecessors. But this

From LiveScience.com: In popular usage, CRISPR

(pronounced 'crisper') is shorthand for CRISPRCas9.

CRISPRs are specialized stretches of DNA, and

the protein Cas9 - where Cas stands for 'CRISPRassociated'

- is an enzyme that acts like a pair of

CRISPR technology was adapted from the

natural defence mechanisms of bacteria and

microorganisms. These organisms use CRISPR-derived

RNA, a molecular cousin to DNA, and various Cas

organisms chop up the DNA of viruses and then stow

bits of that DNA in their own genome, to be used as

a weapon against the foreign invaders should those

The acronym 'CRISPR' stands for Clusters of

describes a region of DNA made up of short, repeated

of technologies that give scientists the ability to

genetic material to be added, removed, or altered at

to genome editing have been developed, the most

These are retrieved from a tiny human embryo a few

days after fertilisation, when it consists of only 50-

to be turned into any tissue in the human body, and

scientists are now working on ways to reprogramme

them in a laboratory and use them as repair patches

to replace defective adult cells. The success from

and communications advisor specialising in healthcare