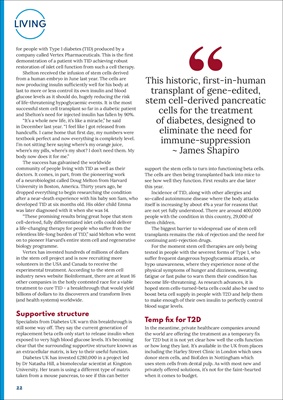 for people with Type 1 diabetes (T1D) produced by a

company called Vertex Pharmaceuticals. This is the first

demonstration of a patient with T1D achieving robust

restoration of islet cell function from such a cell therapy.

from a human embryo in June last year. The cells are

now producing insulin sufficiently well for his body at

last to more or less control its own insulin and blood

glucose levels as it should do, hugely reducing the risk

of life-threatening hypoglycaemic events. It is the most

successful stem cell transplant so far in a diabetic patient

and Shelton's need for injected insulin has fallen by 90%.

in December last year. "I feel like I got released from

handcuffs. I came home that first day, my numbers were

textbook perfect and now everything is completely level.

where's my pills, where's my shot? I don't need them. My

body now does it for me."

The success has galvanised the worldwide

community of people living with T1D as well as their

doctors. It comes, in part, from the pioneering work

of a neurobiologist called Doug Melton from Harvard

University in Boston, America. Thirty years ago, he

dropped everything to begin researching the condition

after a near-death experience with his baby son Sam, who

was later diagnosed with it when she was 14.

a life-changing therapy for people who suffer from the

on to pioneer Harvard's entire stem cell and regenerative

Vertex has invested hundreds of millions of dollars

in the stem cell project and is now recruiting more

volunteers in the USA and Canada to receive the

experimental treatment. According to the stem cell

other companies in the hotly contested race for a viable

treatment to cure T1D - a breakthrough that would yield

billions of dollars to its discoverers and transform lives

Specialists from Diabetes UK warn this breakthrough is

still some way off. They say the current generation of

replacement beta cells only start to release insulin when

clear that the surrounding supportive structure known as

an extracellular matrix, is key to their useful function.

by Dr Natasha Hill, a biomolecular scientist at Kingston

University. Her team is using a different type of matrix

taken from a mouse pancreas, to see if this can better

support the stem cells to turn into functioning beta cells.

The cells are then being transplanted back into mice to

see how well they function. First results are due later

Incidence of T1D, along with other allergies and

itself is increasing by about 4% a year for reasons that

are not yet fully understood. There are around 400,000

people with the condition in this country, 29,000 of

The biggest barrier to widespread use of stem cell

transplants remains the risk of rejection and the need for

For the moment stem cell therapies are only being

tested in people with the severest forms of Type 1, who

hypo unawareness, where they experience none of the

fatigue or fast pulse to warn them their condition has

become life-threatening. As research advances, it is

hoped stem cells-turned-beta cells could also be used to

boost beta cell supply in people with T2D and help them

to make enough of their own insulin to perfectly control

In the meantime, private healthcare companies around

the world are offering the treatment as a temporary fix

or how long they last. It's available in the UK from places

including the Harley Street Clinic in London which uses

donor stem cells, and BioEden in Nottingham which

uses stem cells from dental pulp. As with most new and

privately offered solutions, it's not for the faint-hearted

when it comes to budget.

cells for the treatment

of diabetes, designed to

eliminate the need for