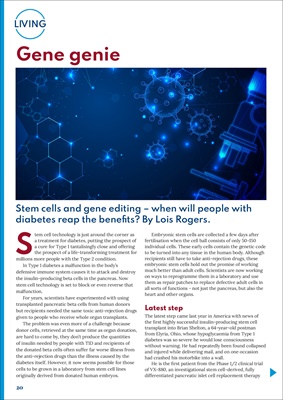 Stem cells and gene editing - when will people with

Stem cell technology is just around the corner as

a treatment for diabetes, putting the prospect of

a cure for Type 1 tantalisingly close and offering

the prospect of a life-transforming treatment for

In Type 1 diabetes a malfunction in the body's

defensive immune system causes it to attack and destroy

the insulin-producing beta cells in the pancreas. Now

stem cell technology is set to block or even reverse that

For years, scientists have experimented with using

given to people who receive whole organ transplants.

The problem was even more of a challenge because

donor cells, retrieved at the same time as organ donation,

are hard to come by, they don't produce the quantities of

insulin needed by people with T1D and recipients of the

drugs than the illness caused by the diabetes

itself. However, it now seems possible for those cells to

be grown in a laboratory from stem cell lines originally

Embryonic stem cells are collected a few days after

fertilisation when the cell ball consists of only 50-150

to be turned into any tissue in the human body. Although

recipients still have to take anti-rejection drugs, these

embryonic stem cells hold out the promise of working

much better than adult cells. Scientists are now working

on ways to reprogramme them in a laboratory and use

them as repair patches to replace defective adult cells in

all sorts of functions - not just the pancreas, but also the

heart and other organs.

The latest step came last year in America with news of

from Elyria, Ohio, whose hypoglycaemia from Type 1

diabetes was so severe he would lose consciousness

without warning. He had repeatedly been found collapsed

and injured while delivering mail, and on one occasion

had crashed his motorbike into a wall.