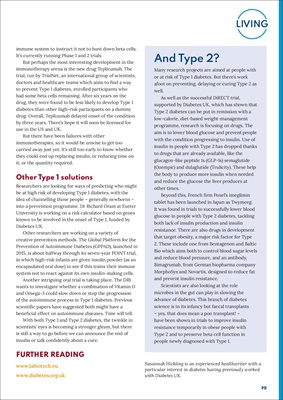 Susannah Hickling is an experienced healthwriter with a

Many research projects are aimed at people with

or at risk of Type 1 diabetes. But there's work

afoot on preventing, delaying or curing Type 2 as

As well as the successful DiRECT trial,

supported by Diabetes UK, which has shown that

Type 2 diabetes can be put in remission with a

programme, research is focusing on drugs. The

aim is to lower blood glucose and prevent people

with the condition progressing to insulin. Use of

insulin in people with Type 2 has dropped thanks

(Ozempic) and dulaglutide (Trulicity). These help

the body to produce more insulin when needed

and reduce the glucose the liver produces at

Beyond this, French firm Poxel's imeglimin

tablet has been launched in Japan as Twymeeg.

It was found in trials to successfully lower blood

both lack of insulin production and insulin

resistance. There are also drugs in development

that target obesity, a major risk factor for Type

2. These include one from Bentagenon and Baltic

Bio which aims both to control blood sugar levels

and reduce blood pressure, and an antibody,

Scientists are also looking at the role

microbes in the gut can play in slowing the

science is in its infancy but faecal transplants

- yes, that does mean a poo transplant! -

have been shown in trials to improve insulin

resistance temporarily in obese people with

Type 2 and to preserve beta cell function in

immune system to instruct it not to hunt down beta cells.

It's currently running Phase 1 and 2 trials.

But perhaps the most interesting development in the

immunotherapy arena is the new drug Teplizumab. The

trial, run by TrialNet, an international group of scientists,

doctors and healthcare teams which aims to find a way

had some beta cells remaining. After six years on the

drug, they were found to be less likely to develop Type 1

diabetes than other high-risk participants on a dummy

by three years. There's hope it will soon be licensed for

use in the US and UK.

But there have been failures with other

immunotherapies, so it would be unwise to get too

carried away just yet. It's still too early to know whether

they could end up replacing insulin, or reducing time on

it, or the quantity required.

Researchers are looking for ways of predicting who might

be at high risk of developing Type 1 diabetes, with the

into a prevention programme. Dr Richard Oram at Exeter

University is working on a risk calculator based on genes

known to be involved in the onset of Type 1, funded by

Other researchers are working on a variety of

creative prevention methods. The Global Platform for the

2015, is about halfway through its seven-year POiNT trial,

in which high-risk infants are given insulin powder (as an

encapsulated oral dose) to see if this trains their immune

system not to react against its own insulin-making cells.

Another intriguing oral trial is taking place. The DRI

wants to investigate whether a combination of Vitamin D

and Omega-3 could slow down or stop the progression

of the autoimmune process in Type 1 diabetes. Previous

With both Type 1 and Type 2 diabetes, the twinkle in

scientists' eyes is becoming a stronger gleam, but there

insulin or talk confidently about a cure.