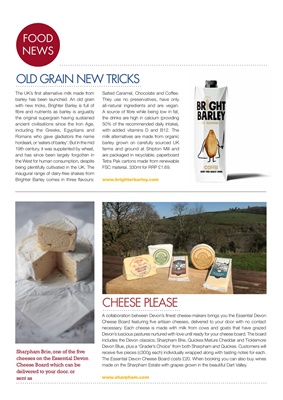 The UK's first alternative milk made from

barley has been launched. An old grain

with new tricks, Brighter Barley is full of

fibre and nutrients as barley is arguably

the original supergrain having sustained

ancient civilisations since the Iron Age,

including the Greeks, Egyptians and

Romans who gave gladiators the name

hordearii, or 'eaters of barley'. But in the mid

19th century, it was supplanted by wheat,

and has since been largely forgotten in

the West for human consumption, despite

being plentifully cultivated in the UK. The

inaugural range of dairy-free shakes from

Cheese Board featuring five artisan cheeses, delivered to your door with no contact

necessary. Each cheese is made with milk from cows and goats that have grazed

Devon's luscious pastures nurtured with love until ready for your cheese board. The board

Devon Blue, plus a 'Grader's Choice' from both Sharpham and Quickes. Customers will

receive five pieces (c300g each) individually wrapped along with tasting notes for each.

The Essential Devon Cheese Board costs £20. When booking you can also buy wines

made on the Sharpham Estate with grapes grown in the beautiful Dart Valley.

They use no preservatives, have only

all-natural ingredients and are vegan.

A source of fibre while being low in fat,

the drinks are high in calcium (providing

50% of the recommended daily intake),

with added vitamins D and B12. The

milk alternatives are made from organic

farms and ground at Shipton Mill and

are packaged in recyclable, paperboard

Tetra Pak cartons made from renewable

Sharpham Brie, one of the five

cheeses on the Essential Devon

Cheese Board which can be

delivered to your door. or