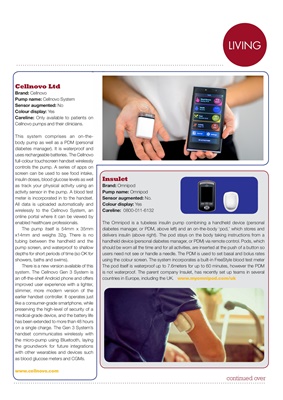 Careline: Only available to patients on

Cellnovo pumps and their clinicians.

This system comprises an on-thebody

pump as well as a PDM (personal

diabetes manager). It is waterproof and

controls the pump. A series of apps on

screen can be used to see food intake,

as track your physical activity using an

activity sensor in the pump. A blood test

meter is incorporated in to the handset.

All data is uploaded automatically and

wirelessly to the Cellnovo System, an

online portal where it can be viewed by

tubing between the handheld and the

pump screen, and waterproof to shallow

depths for short periods of time (so OK for

There is a new version available of this

system. The Cellnovo Gen 3 System is

an off-the-shelf Android phone and offers

improved user experience with a lighter,

slimmer, more modern version of the

preserving the high-level of security of a

medical-grade device, and the battery life

has been extended to more than 48 hours

on a single charge. The Gen 3 System's

the groundwork for future integrations

with other wearables and devices such

as blood glucose meters and CGMs.

diabetes manager, or PDM, above left) and an on-the-body 'pod,' which stores and

delivers insulin (above right). The pod stays on the body taking instructions from a

should be worn all the time and for all activities, are inserted at the push of a button so

users need not see or handle a needle. The PDM is used to set basal and bolus rates

The pod itself is waterproof up to 7.6meters for up to 60 minutes, however the PDM

is not waterproof. The parent company Insulet, has recently set up teams in several

countries in Europe, including the UK. www.myomnipod.com/uk