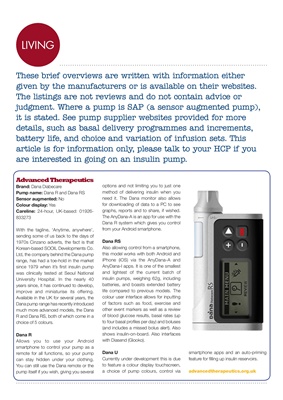 With the tagline, 'Anytime, anywhere',

sending some of us back to the days of

1970s Cinzano adverts, the fact is that

Ltd, the company behind the Dana pump

range, has had a toe-hold in the market

since 1979 when it's first insulin pump

was clinically tested at Seoul National

University Hospital. In the nearly 40

years since, it has continued to develop,

improve and miniaturise its offering.

Available in the UK for several years, the

much more advanced models, the Dana

R and Dana RS, both of which come in a

Allows you to use your Android

smartphone to control your pump as a

remote for all functions, so your pump

can stay hidden under your clothing.

You can still use the Dana remote or the

pump itself if you wish, giving you several

options and not limiting you to just one

method of delivering insulin when you

for downloading of data to a PC to see

The AnyDana-A is an app for use with the

from your Android smartphone.

Also allowing control from a smartphone,

this model works with both Android and

iPhone (iOS) via the AnyDana-A and

AnyDana-I apps. It is one of the smallest

and lightest of the current batch of

life compared to previous models. The

of factors such as food, exercise and

other event markers as well as a review

to four basal profiles per day) and boluses

Currently under development this is due

to feature a colour display touchscreen,

a choice of pump colours, control via

These brief overviews are written with information either

given by the manufacturers or is available on their websites.

The listings are not reviews and do not contain advice or

judgment. Where a pump is SAP (a sensor augmented pump),

it is stated. See pump supplier websites provided for more

details, such as basal delivery programmes and increments,

battery life, and choice and variation of infusion sets. This

article is for information only, please talk to your HCP if you

smartphone apps and an auto-priming

feature for filling up insulin reservoirs.