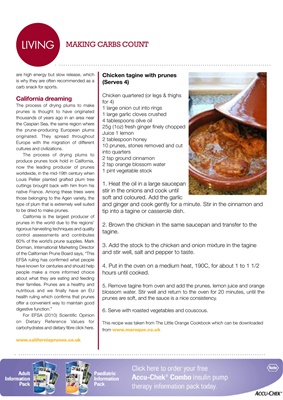 are high energy but slow release, which Chicken tagine with prunes

is why they are often recommended as a (Serves 4)

the process of drying plums to make

prunes is thought to have originated

thousands of years ago in an area near

the Caspian sea, the same region where

originated. they spread throughout

europe with the migration of different

the process of drying plums to

now the leading producer of prunes

worldwide, in the mid-19th century when

cuttings brought back with him from his 1. Heat the oil in a large saucepan

native France. among these trees were stir in the onions and cook until

those belonging to the agen variety, the soft and coloured. add the garlic

type of plum that is extremely well suited and ginger and cook gently for a minute. stir in the cinnamon and

to be dried to make prunes. tip into a tagine or casserole dish.

California is the largest producer of

prunes in the world due to the regions’

2. Brown the chicken in the same saucepan and transfer to the

60% of the world’s prune supplies. Mark

Dorman, international Marketing Director 3. Add the stock to the chicken and onion mixture in the tagine

of the Californian Prune board says, “this and stir well, salt and pepper to taste.

EFSA ruling has confirmed what people

about what they are eating and feeding

their families. Prunes are a healthy and 5. Remove tagine from oven and add the prunes, lemon juice and orange

nutritious and we finally have an eU blossom water. Stir well and return to the oven for 20 minutes, until the

health ruling which confirms that prunes dates are soft, and the sauce is a nice consistency.