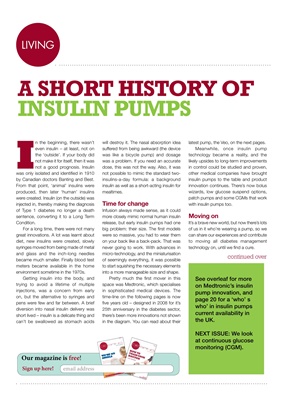 a short history of

n the beginning, there wasn’t will destroy it. the nasal absorption idea latest pump, the veo, on the next pages.

even insulin – at least, not on suffered from being awkward (the device Meanwhile, once insulin pump

the ‘outside’. if your body did was like a bicycle pump) and dosage technology became a reality, and the

not make it for itself, then it was was a problem. if you need an accurate likely upsides to long-term improvements

not a good prognosis. insulin dose, this was not the way. also, it was in control could be studied and proven,

by Canadian doctors banting and best. insulins-a-day formula: a background insulin pumps to the table and product

From that point, ‘animal’ insulins were insulin as well as a short-acting insulin for innovation continues. there’s now bolus

were created. insulin (on the outside) was patch pumps and some CgMs that work

injected in, thereby making the diagnosis Time for change with insulin pumps too.

of type 1 diabetes no longer a death infusion always made sense, as it could

For a long time, there were not many big problem: their size. The first models of us in it who’re wearing a pump, so we

great innovations. a lot was learnt about were so massive, you had to wear them can share our experiences and contribute

diet, new insulins were created, slowly on your back like a back-pack. that was to moving all diabetes management

syringes moved from being made of metal never going to work. With advances in technology on, until we find a cure.

and glass and the inch-long needles micro-technology, and the miniaturisation

became much smaller. Finally blood test of seemingly everything, it was possible

environment sometime in the 1970s. into a more manageable size and shape.

getting insulin into the body, and Pretty much the first mover in this See overleaf for more

trying to avoid a lifetime of multiple space was Medtronic, which specialises on Medtronic’s insulin

injections, was a concern from early in sophisticated medical devices. the

on, but the alternative to syringes and time-line on the following pages is now

pens were few and far between. a brief five years old – designed in 2008 for it’s

diversion into nasal insulin delivery was 25th anniversary in the diabetes sector,

who’ in insulin pumps

can’t be swallowed as stomach acids in the diagram. You can read about their the UK.

NEXT ISSUE: We look

Our magazine is free!