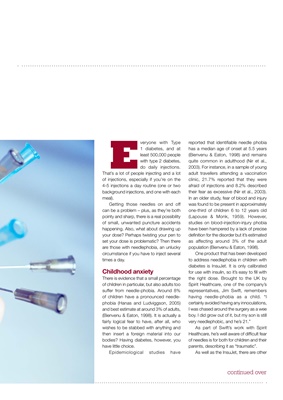 1 diabetes, and at has a median age of onset at 5.5 years

with type 2 diabetes, quite common in adulthood (nir et al.,

do daily injections. 2003). For instance, in a sample of young

of injections, especially if you’re on the clinic, 21.7% reported that they were

background injections, and one with each their fear as excessive (Nir et al., 2003).

meal). in an older study, fear of blood and injury

can be a problem – plus, as they’re both one-third of children 6 to 12 years old

pointy and sharp, there is a real possibility (Lapouse & Monk, 1959). However,

happening. also, what about drawing up have been hampered by a lack of precise

your dose? Perhaps twisting your pen to definition for the disorder but it’s estimated

set your dose is problematic? then there as affecting around 3% of the adult

are those with needlephobia, an unlucky population (Bienvenu & Eaton, 1998).

times a day. to address needlephobia in children with

diabetes is insuJet. it is only calibrated

Childhood anxiety for use with insulin, so it’s easy to fill with

there is evidence that a small percentage the right dose. brought to the Uk by

of children in particular, but also adults too spirit Healthcare, one of the company’s

of children have a pronounced needle- having needle-phobia as a child. “i

phobia (Hanas and Ludviggson, 2005) certainly avoided having any innoculations,

and best estimate at around 3% of adults, i was chased around the surgery as a wee

fairly logical fear to have, after all, who very needlephobic, and he’s 21.”

then insert a foreign material into our Healthcare, he’s well aware of difficult fear

bodies? Having diabetes, however, you of needles is for both for children and their

have little choice. parents, describing it as “traumatic”.

epidemiological studies have as well as the insuJet, there are other