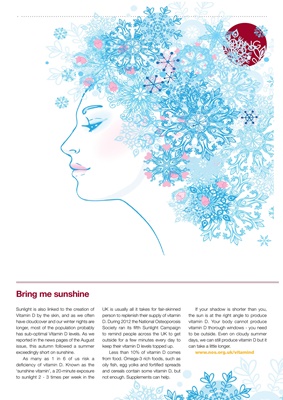 Sunlight is also linked to the creation of UK is usually all it takes for fair-skinned If your shadow is shorter than you,

Vitamin D by the skin, and as we often person to replenish their supply of vitamin the sun is at the right angle to produce

have cloudcover and our winter nights are D. During 2012 the National Osteoporosis vitamin D. Your body cannot produce

has sub-optimal Vitamin D levels. As we to remind people across the UK to get to be outside. Even on cloudy summer

reported in the news pages of the August outside for a few minutes every day to days, we can still produce vitamin D but it

issue, this autumn followed a summer keep their vitamin D levels topped up. can take a little longer.

‘sunshine vitamin’, a 20-minute exposure and cereals contain some vitamin D, but

to sunlight 2 - 3 times per week in the not enough. Supplements can help.