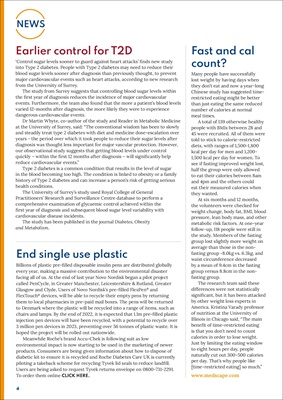 major cardiovascular events such as heart attacks, according to new research

from the University of Surrey.

The study from Surrey suggests that controlling blood sugar levels within

the first year of diagnosis reduces the incidence of major cardiovascular

events. Furthermore, the team also found that the more a patient's blood levels

varied 12-months after diagnosis, the more likely they were to experience

Dr Martin Whyte, co-author of the study and Reader in Metabolic Medicine

at the University of Surrey, said: "The conventional wisdom has been to slowly

diagnosis was thought less important for major vascular protection. However,

our observational study suggests that getting blood levels under control

quickly - within the first 12 months after diagnosis - will significantly help

in the blood becoming too high. The condition is linked to obesity or a family

The University of Surrey's study used Royal College of General

Practitioners' Research and Surveillance Centre database to perform a

comprehensive examination of glycaemic control achieved within the

The study has been published in the journal Diabetes, Obesity

every year, making a massive contribution to the environmental disaster

facing all of us. At the end of last year Novo Nordisk began a pilot project

Glasgow and Clyde, Users of Novo Nordisk's pre-filled FlexPen® and

FlexTouch® devices, will be able to recycle their empty pens by returning

them to local pharmacies in pre-paid mail boxes. The pens will be returned

to Denmark where the plastic will be recycled into a range of items, such as

chairs and lamps. By the end of 2022, it is expected that 1.1m pre-filled plastic

injection pen devices will have been recycled, with a potential to recycle over

3 million pen devices in 2023, preventing over 56 tonnes of plastic waste. It is

hoped the project will be rolled out nationwide.

products. Consumers are being given information about how to dispose of

Many people have successfully

lost weight by having days when

they don't eat and now a year-long

than just eating the same reduced

number of calories at normal

A total of 139 otherwise healthy

people with BMIs between 28 and

45 were recruited. All of them were

told to stick to calorie-restricted

half the group were only allowed

to eat their calories between 8am

and 4pm and the others could

eat their measured calories when

At six months and 12 months,

the volunteers were checked for

pressure, lean body mass, and other

follow-up, 118 people were still in

the study. Members of the fasting

average than those in the nonfasting group

group versus 8.8cm in the nonfasting group.

The research team said these

differences were not statistically

significant, but it has been attacked

by other weight loss experts in

of nutrition at the University of

Illinois in Chicago said, "The main

is that you don't need to count

calories in order to lose weight.

Just by limiting the eating window

to eight hours per day, people

[time-restricted eating] so much."