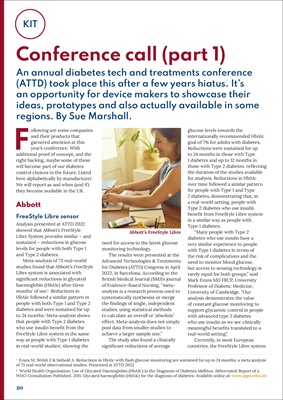 (ATTD) took place this after a few years hiatus. It's

an opportunity for device makers to showcase their

ideas, prototypes and also actually available in some

Following are some companies

and their products that

garnered attention at this

additional proof of concept, and the

right backing, maybe some of these

will become part of our diabetes

control choices in the future. Listed

We will report as and when (and if)

they become available in the UK.

levels for people with both Type 1

Libre system is associated with

months' of use.i Reductions in

HbA1c followed a similar pattern in

people with both Type 1 and Type 2

diabetes and were sustained for up

that people with Type 2 diabetes

who use insulin benefit from the

FreeStyle Libre system in the same

way as people with Type 1 diabetes

in real-world studiesi, showing the

The results were presented at the

for Diabetes (ATTD) Congress in April

is a research process used to

the findings of single, independent

to calculate an overall or 'absolute'

effect. Meta-analysis does not simply

pool data from smaller studies to

The study also found a clinically

glucose levels towards the

goal of 7% for adults with diabetes.

Reductions were sustained for up

to 24 months in those with Type

those with Type 2 diabetes, reflecting

the duration of the studies available

for analysis. Reductions in HbA1c

over time followed a similar pattern

for people with Type 1 and Type

2 diabetes, demonstrating that, in

a real-world setting, people with

Type 2 diabetes who use insulin

in a similar way as people with

"Many people with Type 2

diabetes who use insulin have a

the risk of complications and the

rarely equal for both groups," said

University of Cambridge. "Our

of constant glucose monitoring to

who use insulin as we see clinically

meaningful benefits translated to a

Currently, in most European

i Evans M, Welsh Z & Seibold A. Reductions in HbA1c with flash glucose monitoring are sustained for up to 24 months: a meta analysis

ii World Health Organisation. Use of Glycated Haemoglobin (HbA1C) in the Diagnosis of Diabetes Mellitus: Abbreviated Report of a

WHO Consultation Published. 2011. Glycated haemoglobin (HbA1c) for the diagnosis of diabetes. Available online at: www.apps.who.int