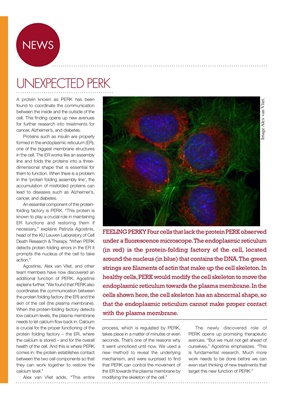 A protein known as PERK has been

found to coordinate the communication

between the inside and the outside of the

for further research into treatments for

Proteins such as insulin are properly

formed in the endoplasmic reticulum (ER),

one of the biggest membrane structures

in the cell. The ER works like an assembly

them to function. When there is a problem

in the 'protein folding assembly line', the

accumulation of misfolded proteins can

lead to diseases such as Alzheimer's,

An essential component of this proteinfolding factory is PERK. "This protein

known to play a crucial role in maintaining

ER functions and restoring them if

head of the KU Leuven Laboratory of Cell

detects protein folding errors in the ER it

prompts the nucleus of the cell to take

Agostinis, Alex van Vliet, and other

team members have now discovered an

coordinates the communication between

the protein folding factory (the ER) and the

skin of the cell (the plasma membrane).

When the protein-folding factory detects

needs to let calcium flow back in. Calcium

is crucial for the proper functioning of the

protein folding factory - the ER, where

the calcium is stored - and for the overall

health of the cell. And this is where PERK

between the two cell components so that

they can work together to restore the

process, which is regulated by PERK,

takes place in a matter of minutes or even

seconds. That's one of the reasons why

it went unnoticed until now. We used a

new method to reveal the underlying

mechanism, and were surprised to find

that PERK can control the movement of

the ER towards the plasma membrane by

modifying the skeleton of the cell."

The newly discovered role of

avenues. "But we must not get ahead of

is fundamental research. Much more

work needs to be done before we can

even start thinking of new treatments that

target this new function of PERK."

under a fluorescence microscope. The endoplasmic reticulum

(in red) is the protein-folding factory of the cell, located

around the nucleus (in blue) that contains the DNA. The green

strings are filaments of actin that make up the cell skeleton. In

healthy cells, PERK would modify the cell skeleton to move the

endoplasmic reticulum towards the plasma membrane. In the

cells shown here, the cell skeleton has an abnormal shape, so

with the plasma membrane.