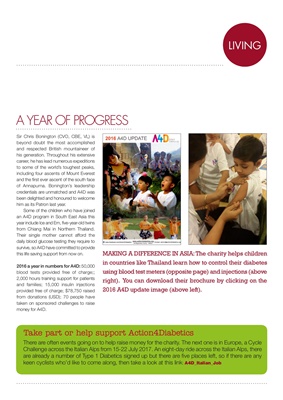 beyond doubt most accomplished and

respected British mountaineer of his

generation. Throughout his extensive

career, he has lead numerous expeditions

to some of the world's toughest peaks,

including four ascents of Mount Everest

and the first ever ascent of the south face

credentials are unmatched and A4D was

been delighted and honoured to welcome

him as its Patron last year.

Some of the children who have joined

an A4D program in South East Asia this

from Chiang Mai in Northern Thailand.

Their single mother cannot afford the

survive, so A4D have committed to provide

this life saving support from now on.

from donations (USD); 70 people have

taken on sponsored challenges to raise

There are often events going on to help raise money for the charity. The next one is in Europe, a Cycle

already a number of Type 1 Diabetics signed up but there are five places left, so if there are any keen

cyclists who'd like to come along, then take a look at this link: http://bit.ly/a4d_italian_cycleride

MAKING A DIFFERENCE IN ASIA: The charity helps thse

children in Thailand learn how to control their diabetes.