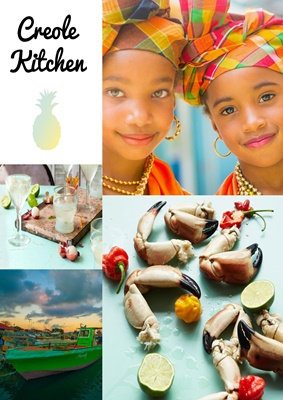 at blue land crabs. They live in small holes in the ground near the

mid valleys. They are usually caught in a very rustic trap. They

chillies, herbs, spices, or fruits like mangoes. This will fatten them

they're not easy to find outside the Caribbean, so in my crab

are even crab hunts when the hunting season is open. The small

oupe holds an annual crab festival, and has a crab museum that

r; it was once snubbed because of the lack of meat in its shells. In

nturies the Church imposed Lent on the slaves, and meat, even

hat time, the slaves relied mainly on crabs as a source of protein.

b was still viewed as slave food; the former slaves, when they

y different ways, the most widespread being the matété

outou in Martinique) is a Carib word, originally used for a large

f reeds and palm leaves. The dish that takes its name is similar to

ut is made with crabs only.

very popular throughout the Lesser Antilles. You could survive

ing meat - except for pork at Christmas - with seafood including

My favourite is conch: it's not really available in the UK but if you

orks well in a chicken stew similar to the octopus chicken

and very fussy. I had a hard time adapting to cold sea fish in my

rest of the body, and the head is where most of the health-