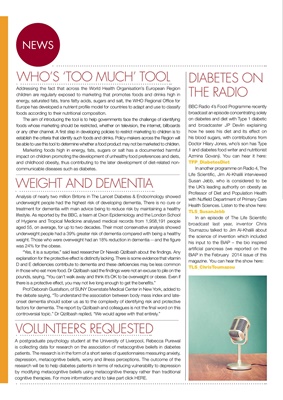 WHO'S 'TOO MUCH' TOOL

on diabetes and diet with Type 1 diabetic

how he sees his diet and its effect on

his blood sugars, with contributions from

1 and diabetes food writer and nutritionist

Azmina Govanji. You can hear it here:

In another programme on Radio 4, The

Susan Jebb, who is considered to be

the UK's leading authority on obesity as

Professor of Diet and Population Health

with Nuffield Department of Primary Care

In an episode of The Life Scientific

Toumazou talked to Jim Al-Khalili about

the science of invention which included

his input to the BiAP - the bio inspired

artificial pancreas (we reported on the

BiAP in the February 2014 issue of this

magazine. You can hear the show here:

underweight people had the highest risk of developing dementia, There is no cure or

lifestyle. As reported by the BBC, a team at Oxon Epidemiology and the London School

of Hygiene and Tropical Medicine analysed medical records from 1,958,191 people

aged 55, on average, for up to two decades. Their most conservative analysis showed

weight. Those who were overweight had an 18% reduction in dementia -- and the figure

"Yes, it is a surprise," said lead researcher Dr Nawab Qizilbash about the findings. Any

explanation for the protective effect is distinctly lacking. There is some evidence that vitamin

in those who eat more food. Dr Qizilbash said the findings were not an excuse to pile on the

pounds, saying, "You can't walk away and think it's OK to be overweight or obese. Even if

there is a protective effect, you may not live long enough to get the benefits."

the debate saying, "To understand the association between body mass index and lateonset dementia should

sober us as to the complexity of identifying risk and protective

factors for dementia. The report by Qizilbash and colleagues is not the final word on this

controversial topic." Dr Qizilbash replied, "We would agree with that entirely."

A postgraduate psychology student at the University of Liverpool, Rebecca Purewal

patients. The research is in the form of a short series of questionnaires measuring anxiety,

depression, metacognitive beliefs, worry and illness perceptions. The outcome of the

Addressing the fact that across the World Health Organisation's European Region

foods according to their nutritional composition.

foods whose marketing should be restricted, whether on television, the internet, billboards

or any other channel. A first step in developing policies to restrict marketing to children is to

establish the criteria that identify such foods and drinks. Policy-makers across the Region will

be able to use this tool to determine whether a food product may not be marketed to children.

Marketing foods high in energy, fats, sugars or salt has a documented harmful

impact on children promoting the development of unhealthy food preferences and diets,

and childhood obesity, thus contributing to the later development of diet-related noncommunicable diseases such as diabetes.