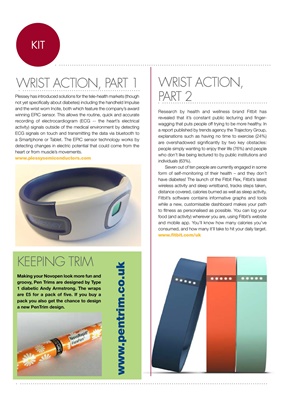 are £5 for a pack of five. If you buy a research by health and wellness brand Fitbit has

a new PenTrim design. wagging that puts people off trying to be more healthy. in

a report published by trends agency the trajectory group,

explanations such as having no time to exercise (24%)

people simply wanting to enjoy their life (76%) and people

who don’t like being lectured to by public institutions and

seven out of ten people are currently engaged in some

form of self-monitoring of their health – and they don’t

have diabetes! the launch of the Fitbit Flex, Fitbit’s latest

while a new, customisable dashboard makes your path

to fitness as personalised as possible. You can log your

food (and activity) wherever you are, using Fitbit’s website

Plessey has introduced solutions for the tele-health markets including and mobile app. You’ll know how many calories you’ve

the handheld impulse and the wrist worn incite, both which feature consumed, and how many it’ll take to hit your daily target.

the company’s award winning ePic sensor. this allows the routine,

quick and accurate recording of ecg signals outside of the medical www.fitbit.com/uk

environment by detecting ecg signals on touch and transmitting

the data via bluetooth to a smartphone or tablet. the ePic sensor

technology works by detecting changes in electric potential that

could come from the heart or from muscle’s movements.