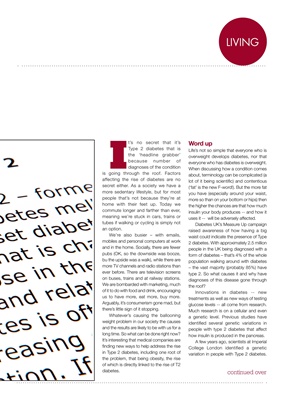 t’s no secret that it’s Word up

the ‘headline grabber’ overweight develops diabetes, nor that

because number of everyone who has diabetes is overweight.

diagnoses of the condition When discussing how a condition comes

is going through the roof. Factors about, terminology can be complicated (a

secret either. as a society we have a (‘fat’ is the new F-word!). but the more fat

more sedentary lifestyle, but for most you have (especially around your waist,

home with their feet up. today we the higher the chances are that how much

commute longer and farther than ever, insulin your body produces -- and how it

meaning we’re stuck in cars, trains or uses it -- will be adversely affected.

an option. raised awareness of how having a big

We’re also busier – with emails, waist could indicate the presence of type

mobiles and personal computers at work 2 diabetes. With approximately 2.5 million

and in the home. socially, there are fewer people in the uk being diagnosed with a

pubs (ok, so the downside was booze, form of diabetes – that’s 4% of the whole

bu the upside was a walk), while there are population walking around with diabetes

ever before. there are television screens type 2. so what causes it and why have

on buses, trains and at railway stations. diagnoses of this disease gone through

We are bombarded with marketing, much the roof?

of it to do with food and drink, encouraging innovations in diabetes -- new

us to have more, eat more, buy more. treatments as well as new ways of testing

there’s little sign of it stopping. much research is on a cellular and even

Whatever’s causing the ballooning a genetic level. Previous studies have

long time. so what can be done right now? how insulin is produced in the pancreas.

it’s interesting that medical companies are Scientists at Imperial College

the problem, that being obesity, the rise

of which is directly linked to the rise of t2