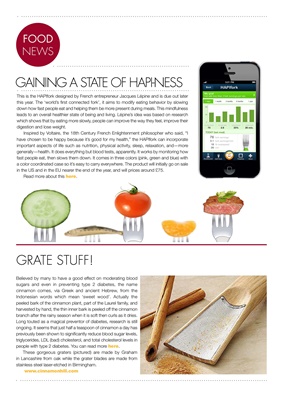 gAInIng A stAte of HAPI-ness

this year. The ‘world’s first connected fork’, it aims to modify eating behavior by slowing

down how fast people eat and helping them be more present during meals. this mindfulness

leads to an overall healthier state of being and living. Lépine’s idea was based on research

which shows that by eating more slowly, people can improve the way they feel, improve their

inspired by Voltaire, the 18th century french enlightenment philosopher who said, “i

have chosen to be happy because it’s good for my health,” the HaPifork can incorporate

generally—health. it does everything but blood tests, apparently. it works by monitoring how

fast people eat, then slows them down. it comes in three colors (pink, green and blue) with

a color coordinated case so it’s easy to carry everywhere. the product will initially go on sale

in the us and in the eu nearer the end of the year, and will prices around £75.

read more about this here.

believed by many to have a good effect on moderating blood

sugars and even in preventing type 2 diabetes, the name

cinnamon comes, via greek and ancient Hebrew, from the

peeled bark of the cinnamon plant, part of the Laurel family, and

harvested by hand, the thin inner bark is peeled off the cinnamon

branch after the rainy season when it is soft then curls as it dries.

Long touted as a magical preventor of diabetes, research is still

ongoing. it seems that just half a teaspoon of cinnamon a day has

people with type 2 diabetes. You can read more here.

these gorgeous graters (pictured) are made by graham

in Lancashire from oak while the grater blades are made from