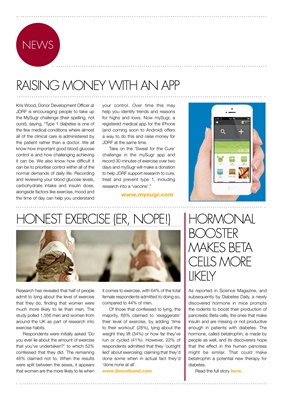 rAIsIng money WItH An APP

Kris Wood, Donor Development Officer at your control. over time this may

the mysugr challenge (their spelling, not for highs and lows. now mysugr, a

ours!), saying, “type 1 diabetes is one of registered medical app for the iPhone

the patient rather than a doctor. We all JDrf at the same time.

it can be. We also know how difficult it record 30 minutes of exercise over two

and reviewing your blood glucose levels, treat and prevent type 1, including

carbohydrate intake and insulin dose, research into a ‘vaccine’.”

the time of day can help you understand

research has revealed that half of people it comes to exercise, with 64% of the total as reported in science magazine, and

admit to lying about the level of exercise female respondents admitted to doing so, subsequently by Diabetes Daily, a newly

that they do, finding that women were compared to 44% of men. discovered hormone in mice prompts

much more likely to lie than men. the of those that confessed to lying, the the rodents to boost their production of

study polled 1,556 men and women from majority, 68% claimed to ‘exaggerate’ pancreatic beta cells, the ones that make

around the uk as part of research into their level of exercise, by adding ‘time insulin and are missing or not productive

exercise habits. to their workout’ (28%), lying about the enough in patients with diabetes. the

respondents were initially asked ‘Do weight they lift (34%) or how far they’ve hormone, called betatrophin, is made by

you ever lie about the amount of exercise run or cycled (41%). However, 22% of people as well, and its discoverers hope

that you’ve undertaken?’ to which 52% respondents admitted that they ‘outright that the effect in the human pancreas

confessed that they did. the remaining lied’ about exercising; claiming that they’d might be similar. that could make

48% claimed not to. When the results done some when in actual fact they’d betatrophin a potential new therapy for

were split between the sexes, it appears ‘done none at all’. diabetes.

that women are the more likely to lie when www.Sweatband.com read the full story here.