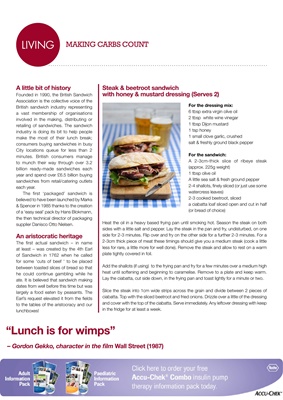 founded in 1990, the british sandwich with honey & mustard dressing (Serves 2)

association is the collective voice of the

involved in the making, distributing or 2 tbsp white wine vinegar

industry is doing its bit to help people 1 tsp honey

make the most of their lunch break; 1 small clove garlic, crushed

city locations queue for less than 2

to munch their way through over 3.2 a 2-3cm-thick slice of ribeye steak

each year. 2-4 shallots, finely sliced (or just use some

believed to have been launched by marks 2-3 cooked beetroot, sliced

of a ‘easy seal’ pack by Hans blokmann, (or bread of choice)

the then technical director of packaging

supplier Danisco otto nielsen. Heat the oil in a heavy based frying pan until smoking hot. season the steak on both

sides with a little salt and pepper. Lay the steak in the pan and fry, undisturbed, on one

at least – was created by the 4th earl less for rare, a little more for well done). remove the steak and allow to rest on a warm

of sandwich in 1762 when he called plate tightly covered in foil.

for some ‘cuts of beef ‘ to be placed

he could continue gambling while he heat until softening and beginning to caramelise. remove to a plate and keep warm.

ate. it is believed that sandwich making Lay the ciabatta, cut side down, in the frying pan and toast lightly for a minute or two.

dates from well before this time but was

largely a food eaten by peasants. the slice the steak into 1cm wide strips across the grain and divide between 2 pieces of

Earl’s request elevated it from the fields ciabatta. top with the sliced beetroot and fried onions. Drizzle over a little of the dressing

to the tables of the aristocracy and our and cover with the top of the ciabatta. serve immediately. any leftover dressing with keep

lunchboxes! in the fridge for at least a week.

“Lunch is for wimps”