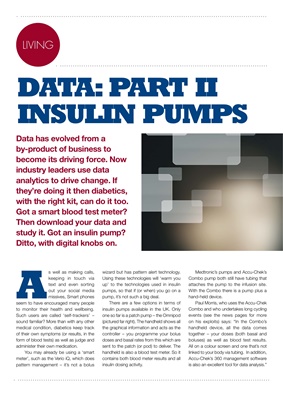 Data has evolved from a

by-product of business to

analytics to drive change. If

they’re doing it then diabetics,

with the right kit, can do it too.

Got a smart blood test meter?

study it. Got an insulin pump?

Ditto, with digital knobs on.

text and even sorting up’ to the technologies used in insulin attaches the pump to the infusion site.

out your social media pumps, so that if (or when) you go on a With the combo there is a pump plus a

seem to have encouraged many people there are a few options in terms of Paul morris, who uses the accu-chek

to monitor their health and wellbeing. insulin pumps available in the uk. only combo and who undertakes long cycling

sound familiar? more than with any other (pictured far right). the handheld shows all on his exploits) says: “in the combo’s

medical condition, diabetics keep track the graphical information and acts as the handheld device, all the data comes

of their own symptoms (or results, in the controller – you programme your bolus together – your doses (both basal and

administer their own medication. sent to the patch (or pod) to deliver. the all on a colour screen and one that’s not

You may already be using a ‘smart handheld is also a blood test meter. so it linked to your body via tubing. in addition,

meter’, such as the Verio iQ, which does contains both blood meter results and all accu-chek’s 360 management software