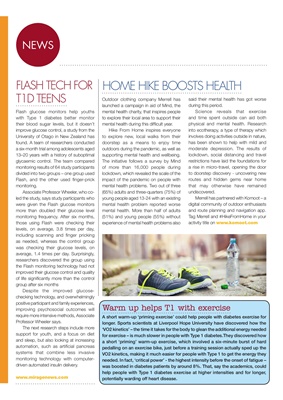 their blood sugar levels, but it doesn't

improve glucose control, a study from the

University of Otago in New Zealand has

found. A team of researchers conducted

a six-month trial among adolescents aged

13-20 years with a history of suboptimal

Flash, and the other used finger-prick

were given the Flash glucose monitors

more than doubled their glucose level

those using Flash were checking their

including scanning and finger pricking

as needed, whereas the control group

was checking their glucose levels, on

the Flash monitoring technology had not

improved their glucose control and quality

of life significantly more than the control

Despite the improved glucosechecking technology,

The next research steps include more

support for youth, and a focus on diet

and sleep, but also looking at increasing

automation, such as artificial pancreas

launched a campaign in aid of Mind, the

to explore their local area to support their

mental health during this difficult year.

Hike From Home inspires everyone

to explore new, local walks from their

doorstep as a means to enjoy time

outdoors during the pandemic, as well as

The initiative follows a survey by Mind

lockdown, which revealed the scale of the

impact of the pandemic on people with

young people aged 13-24 with an existing

mental health. More than half of adults

said their mental health has got worse

and time spent outside can aid both

into ecotherapy, a type of therapy which

involves doing activities outside in nature,

has been shown to help with mild and

moderate depression. The results of

restrictions have laid the foundations for

a rise in micro-travel, opening the door

routes and hidden gems near home

that may otherwise have remained

Merrell has partnered with Komoot - a

and route planning and navigation app.

Tag Merrell and #HikeFromHome in your

longer. Sports scientists at Liverpool Hope University have discovered how the

for exercise - is much slower in people with Type 1 diabetes.They discovered how

a short 'priming' warm-up exercise, which involved a six-minute burst of hard

pedalling on an exercise bike, just before a training session actually sped up the

VO2 kinetics, making it much easier for people with Type 1 to get the energy they

needed. In fact, 'critical power' - the highest intensity before the onset of fatigue -

was boosted in diabetes patients by around 8%. That, say the academics, could

help people with Type 1 diabetes exercise at higher intensities and for longer,

Warm up helps T1 with exercise