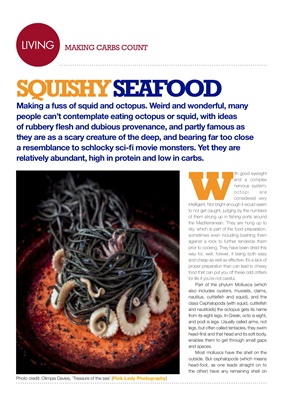 Making a fuss of squid and octopus. Weird and wonderful, many

of rubbery flesh and dubious provenance, and partly famous as

they are as a scary creature of the deep, and bearing far too close

a resemblance to schlocky sci-fi movie monsters. Yet they are

relatively abundant, high in protein and low in carbs.

intelligent. Not bright enough it would seem

to not get caught, judging by the numbers

of them strung up in fishing ports around

the Mediterranean. They are hung up to

dry, which is part of the food preparation,

sometimes even including bashing them

against a rock to further tenderize them

prior to cooking. They have been dried this

way for, well, forever, it being both easy

and cheap as well as effective. It's a lack of

proper preparation than can lead to chewy

food that can put you off these odd critters

for life if you're not careful.

Part of the phylum Mollusca (which

nautilus, cuttlefish and squid), and the

and nautiloids) the octopus gets its name

from its eight legs. In Greek, octo is eight,

and podi is legs. Usually called arms, not

head-first and that head and its soft body,

enables them to get through small gaps

Most molluscs have the shell on the

outside. But cephalopods (which means

head-foot, as one leads straight on to

the other) have any remaining shell on