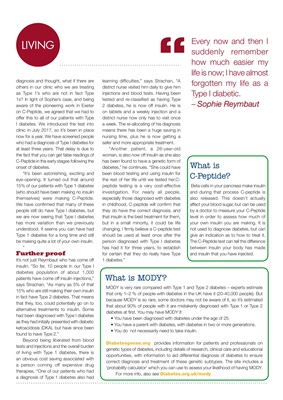 diagnosis and thought, what if there are

others in our clinic who we are treating

as Type 1's who are not in fact Type

1s? In light of Sophie's case, and being

aware of the pioneering work in Exeter

on C-Peptide, we agreed that we had to

offer this to all of our patients with Type

I diabetes. We introduced the test into

now for a year. We have screened people

who had a diagnosis of Type I diabetes for

at least three years. That delay is due to

the fact that you can get false readings of

C-Peptide in the early stages following the

"It's been astonishing, exciting and

eye-opening. It turned out that around

15% of our patients with Type 1 diabetes

(who should have been making no insulin

themselves) were making C-Peptide.

We have confirmed that many of these

people still do have Type I diabetes, but

we are now seeing that Type I diabetes

has more variation than we previously

understood. It seems you can have had

Type 1 diabetes for a long time and still

be making quite a lot of your own insulin.

It's not just Reymbaut who has come off

diabetes population of about 1,000

patients have come off insulin injections,"

says Strachan. "As many as 5% of that

15% who are still making their own insulin

in fact have Type 2 diabetes. That means

that they, too, could potentially go on to

alternative treatments to insulin. Some

had been diagnosed with Type I diabetes

as they had initially presented with diabetic

ketoacidosis (DKA), but have since been

Beyond being liberated from blood

tests and injections and the overall burden

of living with Type 1 diabetes, there is

an obvious cost saving associated with

a person coming off expensive drug

therapies. "One of our patients who had

a diagnosis of Type 1 diabetes also had

district nurse visited him daily to give him

injections and blood tests. Having been

tested and re-classified as having Type

2 diabetes, he is now off insulin. He is

on tablets and a weekly injection and a

district nurse now only has to visit once

a week. The re-allocating of his diagnosis

means there has been a huge saving in

nursing time, plus he is now getting a

"Another patient, a 26-year-old

woman, is also now off insulin as she also

has been found to have a genetic form of

diabetes," he continues. "She could have

been blood testing and using insulin for

the rest of her life until we tested her.Cpeptide testing is a very cost-effective

investigation. For nearly all people,

especially those diagnosed with diabetes

in childhood, C-peptide will confirm that

they do have the correct diagnosis, and

that insulin is the best treatment for them,

but in a small minority, it could be life

should be used at least once after the

person diagnosed with Type I diabetes

has had it for three years, to establish

for certain that they do really have Type

because MODY is so rare, doctors may not be aware of it, so it's estimated that

at first. You may have MODY if:

• You have been diagnosed with diabetes under the age of 25.

• You do not necessarily need to take insulin.

Diabetesgenes.org aims to provide information for patients and professionals on

genetic types of diabetes. It includes details of research, clinical care and educational

correct diagnosis and treatment of these genetic subtypes.

and during that process C-peptide is

affect your blood sugar, but can be used

by a doctor to measure your C-Peptide

level in order to assess how much of

your own insulin you are making. It is

not used to diagnose diabetes, but can

give an indication as to how to treat it.

The C-Peptide test can tell the difference

between insulin your body has made

and insulin that you have injected.

"Every now and then I

how much easier my

life is now; I have almost

forgotten my life as a