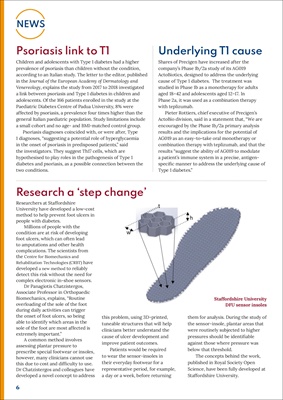 Children and adolescents with Type 1 diabetes had a higher

prevalence of psoriasis than children without the condition,

according to an Italian study. The letter to the editor, published

in the Journal of the European Academy of Dermatology and

Venereology, explains the study from 2017 to 2018 investigated

a link between psoriasis and Type 1 diabetes in children and

adolescents. Of the 166 patients enrolled in the study at the

affected by psoriasis, a prevalence four times higher than the

a small cohort and no age- and BMI-matched control group.

Psoriasis diagnoses coincided with, or were after, Type

in the onset of psoriasis in predisposed patients," said

the investigators. They suggest Th17 cells, which are

hypothesised to play roles in the pathogenesis of Type 1

diabetes and psoriasis, as a possible connection between the

Shares of Precigen have increased after the

ActoBiotics, designed to address the underlying

cause of Type 1 diabetes. The treatment was

studied in Phase 1b as a monotherapy for adults

Phase 2a, it was used as a combination therapy

ActoBio division, said in a statement that, "We are

results and the implications for the potential of

AG019 as an easy-to-take oral monotherapy or

combination therapy with teplizumab, and that the

results "suggest the ability of AG019 to modulate

a patient's immune system in a precise, antigenspecific

manner to address the underlying cause of

University have developed a low-cost

Millions of people with the

condition are at risk of developing

foot ulcers, which can often lead

to amputations and other health

complications. The scientists from

the Centre for Biomechanics and

have developed a new method to

reliably detect this risk without the

overloading of the sole of the foot

during daily activities can trigger

the onset of foot ulcers, so being

able to identify which areas in the

sole of the foot are most affected is

however, many clinicians cannot use

this due to cost and difficulty to use.

Dr Chatzistergos and colleagues have

developed a novel concept to address

tuneable structures that will help

cause of ulcer development and

Patients would be required

to wear the sensor-insoles in

their everyday footwear for a

a day or a week, before returning

them for analysis. During the study of

the sensor-insole, plantar areas that

were routinely subjected to higher

pressures should be identifiable

against those where pressure was

The concepts behind the work,

Science, have been fully developed at