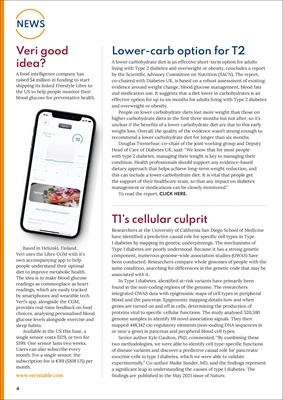 A food intelligence company has

raised $4 million in funding to start

shipping its linked Freestyle Libre to

the US to help people monitor their

living with Type 2 diabetes and overweight or obesity, concludes a report

by the Scientific Advisory Committee on Nutrition (SACN). The report,

co-chaired with Diabetes UK, is based on a robust assessment of existing

and medication use. It suggests that a diet lower in carbohydrates is an

and overweight or obesity.

People on lower carbohydrate diets lost more weight than those on

higher carbohydrate diets in the first three months but not after, so it's

weight loss. Overall, the quality of the evidence wasn't strong enough to

recommend a lower carbohydrate diet for longer than six months.

Douglas Twenefour, co-chair of the joint working group and Deputy

Head of Care of Diabetes UK, said: "We know that for most people

this can include a lower carbohydrate diet. It is vital that people get

the support of their healthcare team, so that any impact on diabetes

management or medications can be closely monitored."

Researchers at the University of California San Diego School of Medicine

1 diabetes by mapping its genetic underpinnings. The mechanisms of

Type 1 diabetes are poorly understood. Because it has a strong genetic

been conducted. Researchers compare whole genomes of people with the

same condition, searching for differences in the genetic code that may be

In Type 1 diabetes, identified at-risk variants have primarily been

found in the non-coding regions of the genome. The researchers

blood and the pancreas. Epigenomic mapping details how and when

genes are turned on and off in cells, determining the production of

genome samples to identify 69 novel association signals. They then

or near a gene) in pancreas and peripheral blood cell types.

two methodologies, we were able to identify cell type-specific functions

of disease variants and discover a predictive causal role for pancreatic

exocrine cells in type 1 diabetes, which we were able to validate

a significant leap in understanding the causes of type 1 diabetes. The

findings are published in the May 2021 issue of Nature.

Based in Helsinki, Finland,

Veri uses the Libre CGM with it's

own accompanying app to help

The idea is to make blood glucose

readings as commonplace as heart

readings, which are easily tracked

by smartphones and wearable tech.

Veri's app, alongside the CGM,

glucose levels alongside exercise and

Available in the US this June, a

month. For a single sensor, the