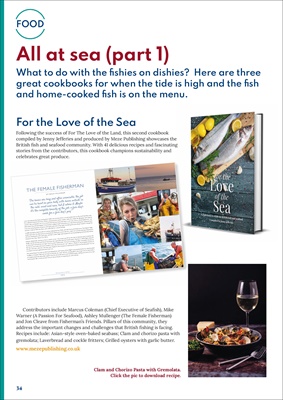 What to do with the fishies on dishies? Here are three

great cookbooks for when the tide is high and the fish

and home-cooked fish is on the menu.

I own and operate two boats working from Wells-next-the-Sea which is a small seaside town on the north Norfolk coast.

catches crabs and lobsters too. It's no secret that this has historically been a man's job, and as a 'female fisherman' I am

often asked 'how did that happen?' Occasionally I will find myself staring down at a box full of stinking bait, splattered with

mud, rain streaming down my face at some god awful time of the night, wondering the same thing! I wouldn't change the

decision I made to ditch the clean, warm office life for a second though.

In 2009 I decided to book myself on a charter angling trip from Wells, and I fell in love with being at sea. The skipper, Nigel,

couldn't get rid of me afterwards so eventually he asked me to work with him. I spent my summers gutting mackerel and

cod and wrestling the odd small shark until 2013, when Nigel sold Sunbeam III and started fishing commercially before

buying his own boat, Never Can Tell-A.

Despite desperately wanting to have a career at sea, I was always put off by the level of physical work involved, the

danger and the fact that commercial day boats don't generally cater for female needs. However, in 2018 Nigel asked me

to come back and work for him again, and I've never looked back. The hours are long and often unsociable, the job can

be hard on your body with hours outside in the cold, wind and rain, but I adore it. Maybe it's the complete honesty of

the job: a fair day's work for a fair day's pay. Maybe it's the romance of working with nature and the elements? I try not

to analyse it but just appreciate how lucky I am.

We retired Never Can Tell-A in 2019 and replaced her with Fairlass, which Nigel's sons predominantly run. Saoirse joined

the fleet in October 2020 and we hope to diversify our catch with her, including fish in the longer term to sell locally. I

'home-grown' fish, so that we don't have to rely as heavily on exporting our catch abroad.

"The hours are long and often unsociable, the job

can be hard on your body with hours outside in

the cold, wind and rain, but I adore it. Maybe

it's the complete honesty of the job: a fair day's

work for a fair day's pay."

FOR THE LOVE OF THE SEA

Warner (A Passion For Seafood), Ashley Mullenger (The Female Fisherman)

and Jon Cleave from Fisherman's Friends. Pillars of this community, they

address the important changes and challenges that British fishing is facing.

Recipes include: Asian-style oven-baked seabass; Clam and chorizo pasta with

For the Love of the Sea

Following the success of For The Love of the Land, this second cookbook

compiled by Jenny Jefferies and produced by Meze Publishing showcases the

British fish and seafood community. With 41 delicious recipes and fascinating

stories from the contributors, this cookbook champions sustainability and

Clam and Chorizo Pasta with Gremolata.