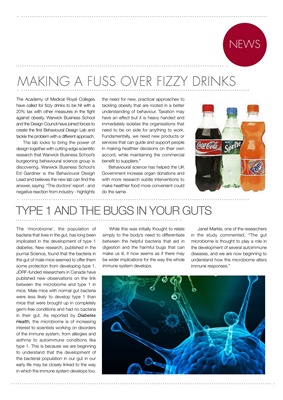 mAkiNg A fuSS over fizzy driNkS

the academy of medical royal colleges the need for new, practical approaches to

20% tax with other measures in the fight understanding of behaviour. taxation may

against obesity. Warwick business school have an effect but it is heavy handed and

create the first Behavioural Design Lab and need to be on side for anything to work.

tackle the problem with a different approach. fundamentally, we need new products or

research that Warwick business school’s accord, while maintaining the commercial

negative reaction from industry - highlights do the same.

tyPe 1 anD the bugs in your guts

the ‘microbiome’, the population of While this was initially thought to relate Janet markle, one of the researchers

bacteria that lives in the gut, has long been simply to the body’s need to differentiate in the study commented, “the gut

diabetes. new research, published in the digestion and the harmful bugs that can the development of several autoimmune

journal science, found that the bacteria in make us ill, it now seems as if there may diseases, and we are now beginning to

JDrf-funded researchers in canada have

published new observations on the link

between the microbiome and type 1 in

were less likely to develop type 1 than

mice that were brought up in completely

germ-free conditions and had no bacteria

in their gut. as reported by Diabetes

Health, the microbiome is of increasing

interest to scientists working on disorders

of the immune system, from allergies and

type 1. this is because we are beginning

to understand that the development of

the bacterial population in our gut in our

early life may be closely linked to the way

in which the immune system develops too.