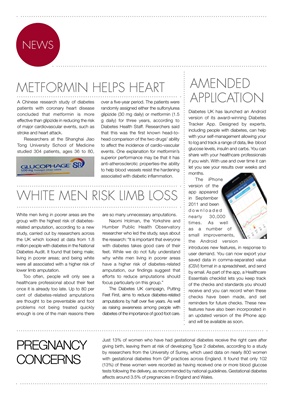 a chinese research study of diabetes over a five-year period. The patients were APPlicATioN

patients with coronary heart disease randomly assigned either the sulfonylurea

Diabetes uk has launched an android

concluded that metformin is more glipizide (30 mg daily) or metformin (1.5

version of its award-winning Diabetes

effective than glipizide in reducing the risk g daily) for three years, according to

including people with diabetes, can help

stroke and heart attack. that this was the first known head-to-

with your self-management allowing your

glucose levels, insulin and carbs. you can

studied 304 patients, ages 36 to 80, events. one explanation for metformin’s

superior performance may be that it has

if you wish. With use and over time it can

let you see your results over weeks and

White men living in poorer areas are the are so many unnecessary amputations. nearly 30,000

group with the highest risk of diabetes- naomi holman, the yorkshire and times. as well

related amputation, according to a new humber Public health observatory as a number of

study, carried out by researchers across researcher who led the study, says about small improvements,

the uk which looked at data from 1.8 the research: “it is important that everyone the android version

Diabetes audit. it found that being male; feet. While we do not fully understand user demand. you can now export your

lower limb amputation. amputation, our findings suggest that by email. as part of the app, a healthcare

too often, people will only see a efforts to reduce amputations should essentials checklist lets you keep track

healthcare professional about their feet focus particularly on this group.” of the checks and standards you should

once it is already too late. up to 80 per the Diabetes uk campaign, Putting receive and you can record when these

are thought to be preventable and foot amputations by half over five years. As well reminders for future checks. these new

enough is one of the main reasons there diabetes of the importance of good foot care. an updated version of the iPhone app

and will be available as soon.

giving birth, leaving them at risk of developing type 2 diabetes, according to a study

by researchers from the university of surrey, which used data on nearly 800 women

concerns with gestational diabetes from gP practices across england. it found that only 102

affects around 3.5% of pregnancies in england and Wales.