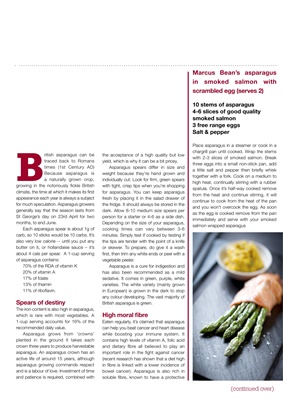 in smoked salmon with

Place asparagus in a steamer or cook in a

with 2-3 slices of smoked salmon. break

traced back to romans yield, which is why it can be a bit pricey.

a little salt and pepper then briefly whisk

because asparagus is weight because they’re hand grown and

together with a fork. cook on a medium to

growing in the notoriously fickle British with tight, crisp tips when you’re shopping

climate, the time at which it makes its first for asparagus. you can keep asparagus

from the heat and continue stirring, it will

continue to cook from the heat of the pan

for much speculation. asparagus growers the fridge. it should always be stored in the

and you won’t overcook the egg. as soon

generally say that the season lasts from dark. allow 8-10 medium size spears per

as the egg is cooked remove from the pan

st george’s day on 23rd april for two person for a starter or 4-6 as a side dish.

immediately and serve with your smoked

months, to end June. Depending on the size of your asparagus,

carb, so 10 sticks would be 10 carbs. it’s minutes. simply test if cooked by testing if

butter on it, or hollandaise sauce – it’s or skewer. to prepare, do give it a wash

about 4 cals per spear. a 1-cup serving first, then trim any white ends or peel with a

20% of vitamin a has also been recommended as a mild

17% of folate sedative. it comes in green, purple, white

11% of riboflavin. in european) is grown in the dark to stop

any colour developing. the vast majority of

which is rare with most vegetables. a High moral fibre

1-cup serving accounts for 16% of the eaten regularly, it’s claimed that asparagus

asparagus grows from ‘crowns’ while boosting your immune system. it

planted in the ground it takes each contains high levels of vitamin a, folic acid

asparagus. an asparagus crown has an important role in the fight against cancer

active life of around 15 years, although (recent research has shown that a diet high

and is a labour of love. investment of time bowel cancer). asparagus is also rich in

and patience is required, combined with soluble fibre, known to have a protective