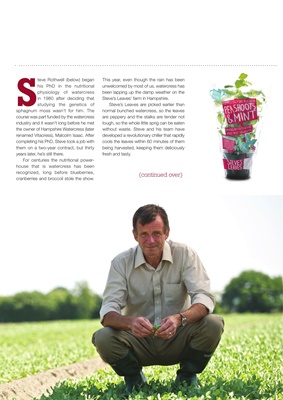 teve rothwell (below) began this year, even though the rain has been

his PhD in the nutritional unwelcomed by most of us, watercress has

physiology of watercress been lapping up the damp weather on the

in 1980 after deciding that steve’s Leaves’ farm in Hampshire.

studying the genetics of steve’s Leaves are picked earlier than

sphagnum moss wasn’t for him. the normal bunched watercress, so the leaves

industry and it wasn’t long before he met tough, so the whole little sprig can be eaten

the owner of Hampshire Watercress (later without waste. steve and his team have

completing his PhD, steve took a job with cools the leaves within 60 minutes of them

them on a two-year contract, but thirty being harvested, keeping them deliciously

for centuries the nutritional power-

house that is watercress has been

cranberries and broccoli stole the show.