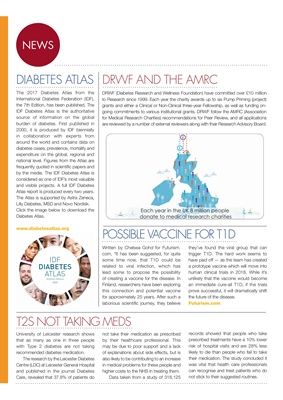 to Research since 1999. Each year the charity awards up to six Pump Priming (project)

grants and either a Clinical or Non-Clinical three-year Fellowship, as well as funding ongoing commitments to various institutional grants. DRWF

for Medical Research Charities) recommendations for Peer Review, and all applications

are reviewed by a number of external reviewers, together with their Research Advisory

Board. For more info ont he AMRC see this video:

The 2017 Diabetes Atlas from the

the 7th Edition, has been published. The

IDF Diabetes Atlas is the authoritative

resource on the global burden of diabetes.

First published in 2000, it is produced by

IDF biennially in collaboration with experts

from around the world and contains data

and expenditure on the global, regional

and national level. Figures from the Atlas

are frequently quoted in scientific papers

and by the media. The IDF Diabetes

Atlas is considered as one of IDF's most

Diabetes Atlas report is produced every

two years. The Atlas is supported by

Written by Chelsea Gohd for Futurism.

com, "It has been suggested, for quite

some time now, that T1D could be

related to viral infection, which has

lead some to propose the possibility

of creating a vaccine for the disease. In

Finland, researchers have been exploring

this connection and potential vaccine

for approximately 25 years. After such a

they've found the viral group that can

have paid off - as the team has created

a prototype vaccine which will move into

human clinical trials in 2018. While it's

unlikely that the vaccine would become

an immediate cure-all T1D, if the trials

prove successful, it will dramatically shift

the future of the disease.

that as many as one in three people

with Type 2 diabetes are not taking

The research by the Leicester Diabetes

and published in the journal Diabetes

Care, revealed that 37.8% of patients do

not take their medication as prescribed

by their healthcare professional. This

may be due to poor support and a lack

of explanations about side effects, but is

also likely to be contributing to an increase

in medical problems for these people and

higher costs to the NHS in treating them.

records showed that people who take

prescribed treatments have a 10% lower

risk of hospital visits and are 28% less

likely to die than people who fail to take

their medication. The study concluded it

was vital that health care professionals

can recognise and treat patients who do

not stick to their suggested routines.