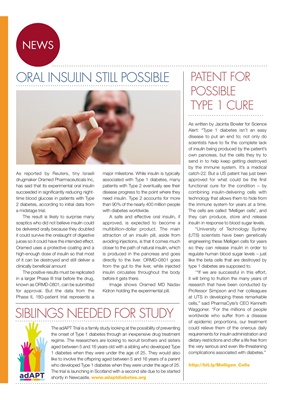 As reported by Reuters, tiny Israeli

2 diabetes, according to initial data from

The result is likely to surprise many

skeptics who did not believe insulin could

be delivered orally because they doubted

it could survive the onslaught of digestive

juices so it could have the intended effect.

Oramed uses a protective coating and a

high-enough dose of insulin so that most

of it can be destroyed and still deliver a

The positive results must be replicated

in a larger Phase III trial before the drug,

for approval. But the data from the

old with a sibling who developed Type 1 diabetes when they were under the age of 25. They

Type 1 diabetes when they were under the age of 25. The trial is launching in Scotland with a

second site due to be started shortly in Newcastle.

major milestone. While insulin is typically

associated with Type 1 diabetes, many

patients with Type 2 eventually see their

disease progress to the point where they

A safe and effective oral insulin, if

approved, is expected to become a

attraction of an insulin pill, aside from

avoiding injections, is that it comes much

closer to the path of natural insulin, which

is produced in the pancreas and goes

directly to the liver. ORMD-0801 goes

from the gut to the liver, while injected

insulin circulates throughout the body

before it gets there.

Medtronic his to work with Qualcomm Life

to develop a new generation of smaller,

(CGMs) for people with Type 2 diabetes

(as well as those with Type 1). Currently,

CGM devices are mostly prescribed for

people with Type 1 diabetes, while those

with Type 2 are more likely to use discrete

this new partnership aims to leverage

that are smaller, easier to use, and more

-- in the hopes of making the technology

available to those with Type 2 diabetes.

There are 20 times more people with Type

Qualcomm has worked with a number

of major healthcare companies to develop

Novartis, and GSK while Medtronic has

embarked on a number of partnerships

with Samsung to optimize the viewing of

CGM and pump data from its MiniMed

Connect offering, and with IBM Watson

to apply cognitive computing to data from