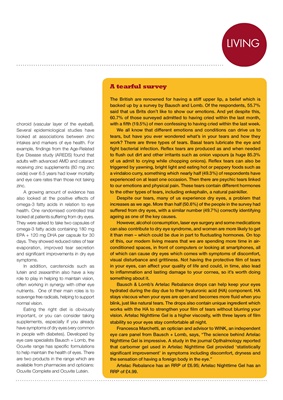 choroid (vascular layer of the eyeball).

looked at associations between zinc

intakes and markers of eye health. For

example, findings from the Age-Related

adults with advanced AMD and cataract

oxide) over 6.5 years had lower mortality

and eye care rates than those not taking

A growing amount of evidence has

also looked at the positive effects of

They were asked to take two capsules of

and significant improvements in dry eye

In addition, carotenoids such as

lutein and zeaxanthin also have a key

role to play in helping to maintain vision,

often working in synergy with other eye

nutrients. One of their main roles is to

Eating the right diet is obviously

important, or you can consider taking

supplements, especially if you already

in people with diabetes). Developed by

to help maintain the health of eyes. There

are two products in the range which are

available from pharmacies and opticians:

The British are renowned for having a stiff upper lip, a belief which is

backed up by a survey by Bausch and Lomb. Of the respondents, 55.7%

said that us Brits don't like to show our emotions. And yet despite this,

60.7% of those surveyed admitted to having cried within the last month,

with a fifth (19.5%) of men confessing to having cried within the last week.

tears, but have you ever wondered what's in your tears and how they

work? There are three types of tears. Basal tears lubricate the eye and

fight bacterial infection. Reflex tears are produced as and when needed

to flush out dirt and other irritants such as onion vapours (a huge 85.3%

of us admit to crying while chopping onions). Reflex tears can also be

triggered by yawning, bright light and eating hot or peppery foods such as

a vindaloo curry, something which nearly half (49.3%) of respondents have

experienced on at least one occasion. Then there are psychic tears linked

to our emotions and physical pain. These tears contain different hormones

to the other types of tears, including enkephalin, a natural painkiller.

Despite our tears, many of us experience dry eyes, a problem that

increases as we age. More than half (50.6%) of the people in the survey had

suffered from dry eyes, with a similar number (49.7%) correctly identifying

ageing as one of the key causes.

However, alcohol consumption, laser eye surgery and some medications

can also contribute to dry eye syndrome, and women are more likely to get

it than men - which could be due in part to fluctuating hormones. On top

of this, our modern living means that we are spending more time in airconditioned spaces,

in front of computers or looking at smartphones, all

of which can cause dry eyes which comes with symptoms of discomfort,

visual disturbance and grittiness. Not having the protective film of tears

in your eyes, can affect your quality of life and could, in time, also lead

to inflammation and lasting damage to your cornea, so it's worth doing

hydrated during the day due to their hyaluronic acid (HA) component. HA

vision. Artelac Nighttime Gel is a higher viscosity, with three layers of film

stability so your eyes stay comfortable all night.

Francesca Marchetti, an optician and advisor to WINK, an independent

Nighttime Gel is impressive. A study in the journal Opthalmology reported

significant improvement' in symptoms including discomfort, dryness and

the sensation of having a foreign body in the eye."

Artelac Rebalance has an RRP of £6.95; Artelac Nighttime Gel has an