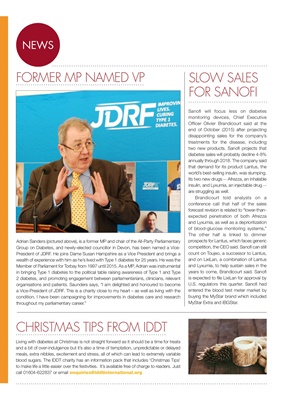 Sanofi will focus less on diabetes

Officer Olivier Brandicourt said at the

end of October (2015) after projecting

disappointing sales for the company's

treatments for the disease, including

annually through 2018. The company said

that demand for its product Lantus, the

insulin, and Lyxumia, an injectable drug --

are struggling as well.

Brandicourt told analysts on a

conference call that half of the sales

forecast revision is related to "lower-thanexpected penetration of both Afrezza

and Lyxumia, as well as a deprioritization

The other half is linked to dimmer

prospects for Lantus, which faces generic

count on Toujeo, a successor to Lantus,

and on LixiLan, a combination of Lantus

and Lyxumia, to help sustain sales in the

is expected to file LixiLan for approval by

U.S. regulators this quarter. Sanofi had

buying the MyStar brand which included

Adrian Sanders (pictured above), is a former MP and chair of the All-Party Parliamentary

Group on Diabetes, and newly-elected councillor in Devon, has been named a VicePresident

of JDRF. He joins Dame Susan Hampshire as a Vice President and brings a

wealth of experience with him as he's lived with Type 1 diabetes for 25 years. He was the

Member of Parliament for Torbay from 1997 until 2015. As a MP, Adrian was instrumental

organisations and patients. Saunders says, "I am delighted and honoured to become

a Vice-President of JDRF. This is a charity close to my heart - as well as living with the

condition, I have been campaigning for improvements in diabetes care and research

throughout my parliamentary career."

and a bit of over-indulgence but it's also a time of temptation, unpredictable or delayed

meals, extra nibbles, excitement and stress, all of which can lead to extremely variable

blood sugars. The IDDT charity has an information pack that includes 'Christmas Tips'

to make life a little easier over the festivities. It's available free of charge to readers. Just