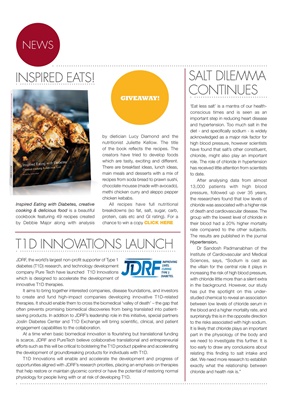 ‘Eat less salt’ is a mantra of our health-

conscious times and is seen as an

and hypertension. Too much salt in the

diet - and specifically sodium - is widely

acknowledged as a major risk factor for

have found that salt’s other constituent,

role. The role of chloride in hypertension

has received little attention from scientists

After analysing data from almost

pressure, followed up over 35 years,

the researchers found that low levels of

chloride was associated with a higher risk

of death and cardiovascular disease. The

group with the lowest level of chloride in

their blood had a 20% higher mortality

rate compared to the other subjects.

The results are published in the journal

Dr Sandosh Padmanabhan of the

Institute of Cardiovascular and Medical

diabetes (T1D) research, and technology development the villain for the central role it plays in

innovative T1D therapies. in the background. However, our study

It aims to bring together interested companies, disease foundations, and investors has put the spotlight on this under-

therapies. It should enable them to cross the biomedical ‘valley of death’ – the gap that between low levels of chloride serum in

often prevents promising biomedical discoveries from being translated into patient- the blood and a higher mortality rate, and

saving products. In addition to JDRF’s leadership role in this initiative, special partners surprisingly this is in the opposite direction

Joslin Diabetes Center and T1D Exchange will bring scientific, clinical, and patient to the risks associated with high sodium.

engagement capabilities to the collaboration. It is likely that chloride plays an important

is scarce, JDRF and PureTech believe collaborative translational and entrepreneurial we need to investigate this further. It is

the development of groundbreaking products for individuals with T1D. relating this finding to salt intake and

T1D Innovations will enable and accelerate the development and progress of diet. We need more research to establish

opportunities aligned with JDRF’s research priorities, placing an emphasis on therapies exactly what the relationship between

that help restore or maintain glycemic control or have the potential of restoring normal chloride and health risk is.”

physiology for people living with or at risk for developing T1D.