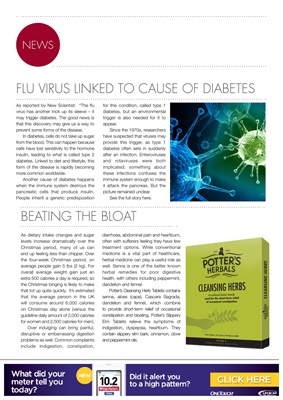 fLu VIRuS LINKED To cAuSE of DIABETES

As reported by New Scientist: “The flu for this condition, called type 1

virus has another trick up its sleeve – it diabetes, but an environmental

may trigger diabetes. The good news is trigger is also needed for it to

that this discovery may give us a way to appear.

prevent some forms of the disease. Since the 1970s, researchers

In diabetes, cells do not take up sugar have suspected that viruses may

from the blood. This can happen because provide this trigger, as type 1

insulin, leading to what is called type 2 after an infection. Enteroviruses

diabetes. Linked to diet and lifestyle, this and rotaviruses were both

form of the disease is rapidly becoming implicated; something about

Another cause of diabetes happens immune system enough to make

when the immune system destroys the it attack the pancreas. But the

Christmas period, many of us can treatment options. While conventional

end up feeling less than chipper. Over medicine is a vital part of healthcare,

the four-week Christmas period, on herbal medicine can play a useful role as

average people gain 5 lbs (2 kg). For well. Senna is one of the better known

extra 500 calories a day is required, so health, with others including peppermint,

the Christmas binging is likely to make dandelion and fennel.

that the average person in the UK senna, aloes (cape), Cascara Sagrada,

will consume around 6,000 calories dandelion and fennel, which combine

for women and 2,500 calories for men). Elm Tablets relieve the symptoms of

Over indulging can bring painful, indigestion, dyspepsia, heartburn. They