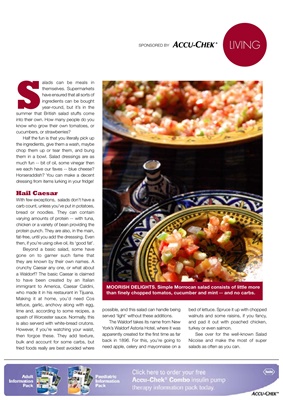 alads can be meals in

have ensured that all sorts of

ingredients can be bought

year-round, but it’s in the

into their own. How many people do you

know who grow their own tomatoes, or

Half the fun is that you literally pick up

the ingredients, give them a wash, maybe

chop them up or tear them, and bung

them in a bowl. Salad dressings are as

much fun -- bit of oil, some vinegar then

we each have our faves -- blue cheese?

Horseraddish? You can make a decent

dressing from items lurking in your fridge!

With few exceptions, salads don’t have a

bread or noodles. They can contain

varying amounts of protein -- with tuna,

chicken or a variety of bean providing the

protein punch. They are also, in the main,

fat-free, until you add the dresssing. Even

then, if you’re using olive oil, its ‘good fat’.

Beyond a basic salad, some have

gone on to garner such fame that

they are known by their own names. A

crunchy Caesar any one, or what about

a Waldorf? The basic Caesar is claimed

to have been created by an Italian

who made it in his restaurant in Tijuana. than finely chopped tomatos, cucumber and mint -- and no carbs.

Making it at home, you’d need Cos

lettuce, garlic, anchovy along with egg,

lime and, according to some recipes, a possible, and this salad can handle being bed of lettuce. Spruce it up with chopped

spash of Worcester sauce. Normally, this served ‘light’ without these additions. walnuts and some raisins, if you fancy,

is also serverd with white-bread crutons. The Waldorf takes its name from New and pad it out with poached chicken,

However, if you’re watching your waist, York’s Waldorf Astoria Hotel, where it was turkey or even salmon.

then forgoe these. They add texture, apparently created for the first time as far See over for the well-known Salad

bulk and account for some carbs, but back in 1896. For this, you’re going to Nicoise and make the most of super

fried foods really are best avoided where need apple, celery and mayonnaise on a salads as often as you can.