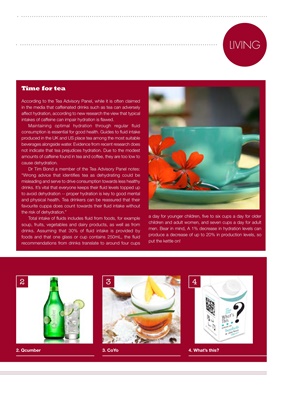 According to the Tea Advisory Panel, while it is often claimed

in the media that caffeinated drinks such as tea can adversely

affect hydration, according to new research the view that typical

intakes of caffeine can impair hydration is flawed.

consumption is essential for good health. Guides to fluid intake

beverages alongside water. Evidence from recent research does

not indicate that tea prejudices hydration. Due to the modest

amounts of caffeine found in tea and coffee, they are too low to

“Wrong advice that identifies tea as dehydrating could be

misleading and serve to drive consumption towards less healthy

drinks. It’s vital that everyone keeps their fluid levels topped up

to avoid dehydration -- proper hydration is key to good mental

and physical health. Tea drinkers can be reassured that their

favourite cuppa does count towards their fluid intake without

the risk of dehydration.”

Total intake of fluids includes fluid from foods, for example a day for younger children, five to six cups a day for older

soup, fruits, vegetables and dairy products, as well as from children and adult women, and seven cups a day for adult

drinks. Assuming that 30% of fluid intake is provided by men. Bear in mind, A 1% decrease in hydration levels can

foods and that one glass or cup contains 250mL, the fluid produce a decrease of up to 20% in production levels, so

recommendations from drinks translate to around four cups put the kettle on!