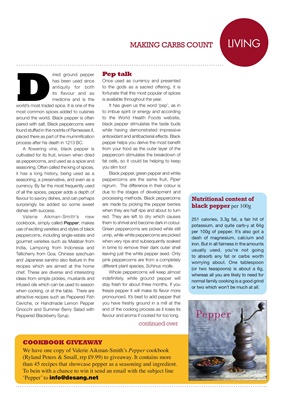 has been used since

its flavour and as

medicine and is the

world's most traded spice. It is one of the

most common spices added to cuisines

around the world. Black pepper is often

paired with salt. Black peppercorns were

found stuffed in the nostrils of Ramesses II,

placed there as part of the mummification

A flowering vine, black pepper is

cultivated for its fruit, known when dried

as peppercorns, and used as a spice and

it has a long history, being used as a

seasoning, a preservative, and even as a

currency. By far the most frequently used

of all the spices, pepper adds a depth of

flavour to savory dishes, and can perhaps

surpisingly be added so some sweet

use of exciting varieties and styles of black

peppercorns, including single-estate and

gourmet varieties such as Malabar from

India, Lampong from Indonesia and

and Japanese sansho also feature in the

recipes which are aimed at the home

chef. These are diverse and interesting

ideas from simple pickles, mustards and

infused oils which can be used to season

when cooking, or at the table. There are

attractive recipes such as Peppered Fish

Gnocchi and Summer Berry Salad with

We have one copy of Valerie Aikman-Smith's Pepper cookbook

than 45 recipes that showcase pepper as a seasoning and ingredient.

Once used as currency and presented

to the gods as a sacred offering, it is

fortunate that this most popular of spices

is available throughout the year.

It has given us the word 'pep', as in

to imbue spirit or energy and according

while having demonstrated impressive

pepper helps you derive the most benefit

from your food as the outer layer of the

peppercorn stimulates the breakdown of

fat cells, so it could be helping to keep

peppercorns are the same fruit, Piper

nigrum. The difference in their colour is

due to the stages of development and

are made by picking the pepper berries

when they are half ripe and about to turn

red. They are left to dry which causes

them to shrivel and become dark in colour.

Green peppercorns are picked while still

unrip, while white peppercorns are picked

when very ripe and subsequently soaked

in brine to remove their dark outer shell

pink peppercorns are from a completely

indefinitely, while ground pepper will

stay fresh for about three months. If you

freeze pepper it will make its flavor more

pronounced. It's best to add pepper that

you have freshly ground in a mill at the

end of the cooking process as it loses its

flavour and aroma if cooked for too long.

potassium, and quite carb-y at 64g

dash of magnesium, calcium and

iron. But in all fairness in the amounts

usually used, you're not going

to absorb any fat or carbs worth

worrying about. One tablespoon

whereas all you are likely to need for

or two which won't be much at all.