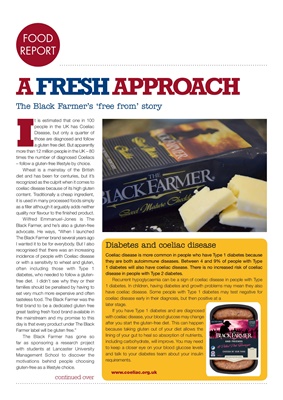 The Black Farmer's 'free from' story

they are both autoimmune diseases. Between 4 and 9% of people with Type

1 diabetes will also have coeliac disease. There is no increased risk of coeliac

disease in people with Type 2 diabetes.

1 diabetes. In children, having diabetes and growth problems may mean they also

have coeliac disease. Some people with Type 1 diabetes may test negative for

coeliac disease early in their diagnosis, but then positive at a

If you have Type 1 diabetes and are diagnosed

with coeliac disease, your blood glucose may change

after you start the gluten-free diet. This can happen

because taking gluten out of your diet allows the

lining of your gut to heal so absorption of nutrients,

including carbohydrate, will improve. You may need

to keep a closer eye on your blood glucose levels

and talk to your diabetes team about your insulin

t is estimated that one in 100

people in the UK has Coeliac

Disease, but only a quarter of

a gluten free diet. But apparently

times the number of diagnosed Coeliacs

Wheat is a mainstay of the British

diet and has been for centuries, but it's

recognized as the culprit when it comes to

coeliac disease because of its high gluten

it is used in many processed foods simply

as a filler although it arguably adds neither

quality nor flavour to the finished product.

advocate. He ways, "When I launched

I wanted it to be for everybody. But I also

recognised that there was an increasing

incidence of people with Coeliac disease

or with a sensitivity to wheat and gluten,

often including those with Type 1

diet. I didn't see why they or their

families should be penalised by having to

tasteless food. The Black Farmer was the

first brand to be a dedicated gluten free

the mainstream and my promise to this

day is that every product under The Black

Farmer label will be gluten free."

The Black Farmer has gone so

far as sponsoring a research project

with students at Lancaster University

Management School to discover the

gluten-free as a lifestyle choice.