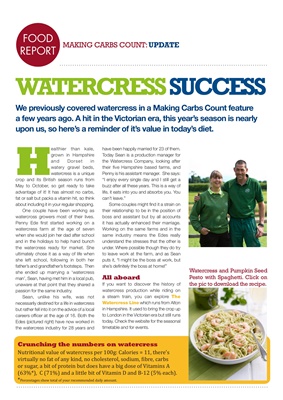 We previously covered watercress in a Making Carbs Count feature

a few years ago. A hit in the Victorian era, this year's season is nearly

upon us, so here's a reminder of it's value in today's diet.

watercress is a unique

crop and its British season runs from

May to October, so get ready to take

advantage of it! It has almost no carbs,

fat or salt but packs a vitamin hit, so think

about including it in your regular shopping.

One couple have been working as

watercross growers most of their lives.

watercress farm at the age of seven

when she would join her dad after school

and in the holidays to help hand bunch

the watercress ready for market. She

ultimately chose it as a way of life when

she left school, following in both her

father's and grandfather's footsteps. Then

she ended up marrying a 'watercress

man', Sean, having met him in a local pub,

unaware at that point that they shared a

passion for the same industry.

Sean, unlike his wife, was not

necessarily destined for a life in watercress

but rather fell into it on the advice of a local

careers officer at the age of 16. Both the

the watercress industry for 28 years and

have been happily married for 23 of them.

Today Sean is a production manager for

the Watercress Company, looking after

their five Hampshire based farms, and

Penny is his assistant manager. She says:

"I enjoy every single day and I still get a

buzz after all these years. This is a way of

life, it eats into you and absorbs you. You

their relationship to be in the position of

boss and assistant but by all accounts

it has actually enhanced their marriage.

Working on the same farms and in the

understand the stresses that the other is

under. Where possible though they do try

to leave work at the farm, and as Sean

puts it, "I might be the boss at work, but

she's definitely the boss at home!"

If you want to discover the history of

watercress production while riding on

a steam train, you can explore The

Watercress Line which runs from Alton

in Hampshire. It used to bring the crop up

to London in the Victorian era but still runs

timetable and for events.

virtually no fat of any kind, no cholesterol, sodium, fibre, carbs

or sugar, a bit of protein but does have a big dose of Vitamins A

Crunching the numbers on watercress