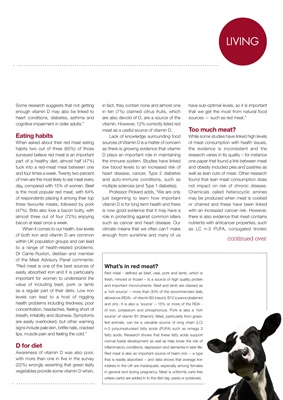 Some research suggests that not getting

enough vitamin D may also be linked to

When asked about their red meat eating

tuck into a red-meat meal between one

of men are the most likely to eat meat every

day, compared with 15% of women. Beef

is the most popular red meat, with 64%

of respondents placing it among their top

almost three out of four (72%) enjoying

bacon at least once a week.

When it comes to our health, low levels

of both iron and vitamin D are common

within UK population groups and can lead

to a range of health-related problems.

of the Meat Advisory Panel comments:

"Red meat is one of the best sources of

easily absorbed iron and it is particularly

important for women to understand the

value of including beef, pork or lamb

as a regular part of their diets. Low iron

levels can lead to a host of niggling

are easily overlooked, but other warning

with more than one in five in the survey

vegetables provide some vitamin D when,

Red meat - defined as beef, veal, pork and lamb, which is

fresh, minced or frozen - is a source of high quality protein

and important micronutrients. Beef and lamb are classed as

a 'rich source' - more than 30% of the recommended daily

of iron, potassium and phosphorous. Pork is also a 'rich

source' of vitamin B1 (thiamin). Meat, particularly from grassfed animals,

can be a valuable source of long chain (LC)

normal foetal development as well as help lower the risk of

that is readily absorbed -- and data shows that average iron

intakes in the UK are inadequate, especially among females in

general and during pregnancy.

in fact, they contain none and almost one

in ten (7%) claimed citrus fruits, which

are also devoid of D, are a source of the

meat as a useful source of vitamin D.

sources of Vitamin D is a matter of concern

as there is growing evidence that vitamin

the immune system. Studies have linked

low blood levels to an increased risk of

and auto-immune conditions, such as

Professor Pickard adds, "We are only

just beginning to learn how important

vitamin D is for long term health and there

is now good evidence that it may have a

role in protecting against common killers

such as cancer and heart disease. Our

enough from sunshine and many of us

have sub-optimal levels, so it is important

that we get the most from natural food

sources - such as red meat."

While some studies have linked high levels

of meat consumption with health issues,

the evidence is inconsistent and the

research varies in its quality - for instance

one paper that found a link between meat

and obesity included pies and pastries as

well as lean cuts of meat. Other research

found that lean meat consumption does

not impact on risk of chronic disease.

may be produced when meat is cooked

or charred and these have been linked

with an increased cancer risk. However,

there is also evidence that meat contains

nutrients with anticancer properties, such