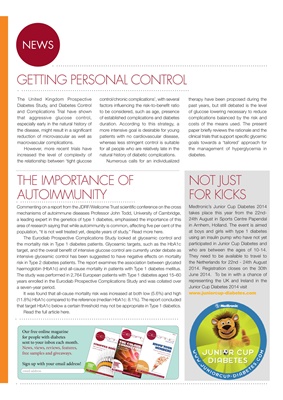 a leading expert in the genetics of type 1 diabetes, emphasised the importance of this

area of research saying that while autoimmunity is common, affecting five per cent of the

population, "it is not well treated yet, despite years of study." Read more here.

The Eurodiab Prospective Complications Study looked at glyceamic control and

the mortality risk in Type 1 diabetes patients. Glycemic targets, such as the HbA1c

target, and the overall benefit of intensive glucose control are currently under debate

risk in Type 2 diabetes patients. The report examins the association between glycated

The study was performed in 2,764 European patients with Type 1 diabetes aged 15-60

It was found that all-cause mortality risk was increased at both low (5.6%) and high

that target HbA1c below a certain threshold may not be appropriate in Type 1 diabetics.

for people with diabetes

sent to your inbox each month.

takes place this year from the 22nd-

in Arnhem, Holland. The event is aimed

at boys and girls with type 1 diabetes

using an insulin pump who have not yet

participated in Junior Cup Diabetes and

They need to be available to travel to

the Netherlands for 22nd - 24th August

representing the UK and Ireland in the

and Complications Trial have shown

especially early in the natural history of

reduction of microvascular as well as

However, more recent trials have

increased the level of complexity of

the relationship between 'tight glucose

to be considered, such as age, presence

of established complications and diabetes

duration. According to this strategy, a

patients with no cardiovascular disease,

whereas less stringent control is suitable

for all people who are relatively late in the

Numerous calls for an individualized

therapy have been proposed during the

past years, but still debated is the level

of glucose lowering necessary to reduce

complications balanced by the risk and

costs of the means used. The present

paper briefly reviews the rationale and the

goals towards a 'tailored' approach for

the management of hyperglycemia in