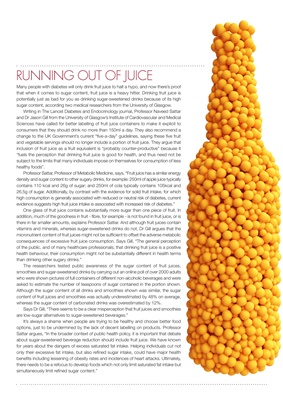 RUNNING OUT OF JUICE

Many people with diabetes will only drink fruit juice to halt a hypo, and now there's proof

sugar content, according two medical researchers from the University of Glasgow.

consumers that they should drink no more than 150ml a day. They also recommend a

and vegetable servings should no longer include a portion of fruit juice. They argue that

"fuels the perception that drinking fruit juice is good for health, and thus need not be

density and sugar content to other sugary drinks, for example: 250ml of apple juice typically

26.5g of sugar. Additionally, by contrast with the evidence for solid fruit intake, for which

high consumption is generally associated with reduced or neutral risk of diabetes, current

One glass of fruit juice contains substantially more sugar than one piece of fruit. In

addition, much of the goodness in fruit - fibre, for example - is not found in fruit juice, or is

there in far smaller amounts, explains Professor Sattar. And although fruit juices contain

vitamins and minerals, whereas sugar-sweetened drinks do not, Dr Gill argues that the

of the public, and of many healthcare professionals, that drinking fruit juice is a positive

than drinking other sugary drinks."

The researchers tested public awareness of the sugar content of fruit juices,

asked to estimate the number of teaspoons of sugar contained in the portion shown.

Although the sugar content of all drinks and smoothies shown was similar, the sugar

content of fruit juices and smoothies was actually underestimated by 48% on average,

whereas the sugar content of carbonated drinks was overestimated by 12%.

Says Dr Gill, "There seems to be a clear misperception that fruit juices and smoothies

are low-sugar alternatives to sugar-sweetened beverages."

options, just to be undermined by the lack of decent labelling on products. Professor

Sattar argues, "In the broader context of public health policy, it is important that debate

about sugar-sweetened beverage reduction should include fruit juice. We have known

for years about the dangers of excess saturated fat intake. Helping individuals cut not

only their excessive fat intake, but also refined sugar intake, could have major health

benefits including lessening of obesity rates and incidences of heart attacks. Ultimately,