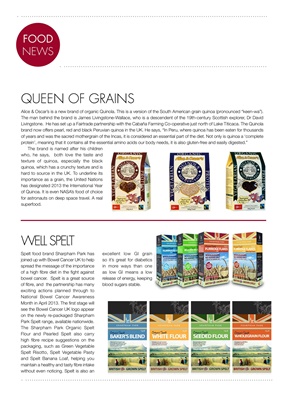 alice & oscar’s is a new brand of organic Quinola. this is a version of the south american grain quinoa (pronounced “keen-wa”).

the man behind the brand is James Livingstone-Wallace, who is a descendent of the 19th-century scottish explorer, Dr David

Livingstone. He has set up a fairtrade partnership with the Cabaña farming Co-operative just north of Lake titicaca. the Quinola

brand now offers pearl, red and black Peruvian quinoa in the uk. He says, “in Peru, where quinoa has been eaten for thousands

of years and was the sacred mothergrain of the incas, it is considered an essential part of the diet. not only is quinoa a ‘complete

protein’, meaning that it contains all the essential amino acids our body needs, it is also gluten-free and easily digested.”

the brand is named after his children

who, he says, both love the taste and

texture of quinoa, especially the black

quinoa, which has a crunchy texture and is

hard to source in the uk. to underline its

importance as a grain, the united nations

has designated 2013 the international Year

of Quinoa. it is even nasa’s food of choice

for astronauts on deep space travel. a real

spread the message of the importance in more ways than one

of fibre, and the partnership has many blood sugars stable.

exciting actions planned through to

Month in April 2013. The first stage will

on the newly re-packaged sharpham

high fibre recipe suggestions on the

packaging, such as green Vegetable

and spelt banana Loaf, helping you

without even noticing. spelt is also an