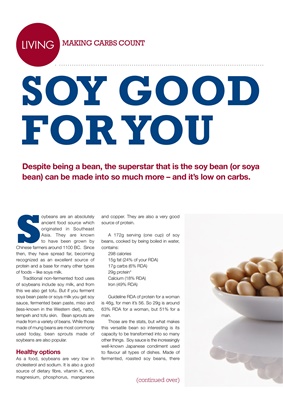 Despite being a bean, the superstar that is the soy bean (or soya

bean) can be made into so much more – and it’s low on carbs.

oybeans are an absolutely and copper. they are also a very good

to have been grown by beans, cooked by being boiled in water,

Chinese farmers around 1100 bC. since contains:

then, they have spread far, becoming 298 calories

of soybeans include soy milk, and from iron (49% rDa)

this we also get tofu. but if you ferment

made from a variety of beans. While those those are the stats, but what makes

used today, bean sprouts made of capacity to be transformed into so many

soybeans are also popular. other things. soy sauce is the increasingly

Healthy options to flavour all types of dishes. Made of

as a food, soybeans are very low in fermented, roasted soy beans, there

cholesterol and sodium. it is also a good